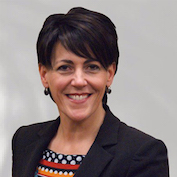 CYBG confirmed last week it will retire its 175-year-old Clydesdale and Yorkshire Bank brands and rename itself Virgin Money UK by the end of this year.

Lucy Dimes will join CYBG in July as group business transformation officer “to lead on improving the efficiency and effectiveness of the bank and the successful delivery of its investment and transformation plan.”

CYBG said: “Lucy previously worked with UBM, a global provider of business information where she was CEO EMEA (Europe, Middle-East and Africa), delivering significant growth in revenues through accelerated transformation of the operating model.

“She previously held a number of CEO and COO roles for telecoms and technology companies around the world, including Fujitsu, Equiniti Group and Nokia.”

In addition, Fraser Ingram has been announced as CYBG’s group chief operating officer.

“Over the last six months, he has played an integral role on the leadership team as interim chief operating officer, leading the work to bring together the operational and technology functions of CYBG and Virgin Money while also shaping future strategy.

“Fraser has a wealth of experience in banking and FinTech and was a driving force behind the development and implementation of the Bank’s iB technology platform and award-winning digital brand B.

“Fraser joined CYBG from Kleinwort Benson, where he held the role of COO.

“Prior to this he held a wide range of senior business and technology roles, mainly in RBS, including CIO of Citizens Bank in the USA.”

“She is responsible for internal and external communications and the bank’s sustainability agenda, including the not-for-profit digital fundraising platform, Virgin Money Giving,” said CYBG.

“Emma previously held the role of chief of staff at CYBG.

“She has a strong background in financial services strategy, having held senior strategy roles both in CYBG and RBS.”

David Duffy, CEO of CYBG said: “Following the success of last week’s capital markets day, where we presented our refreshed medium-term strategy for the combined group, I am delighted to confirm three new senior appointments to our leadership team.

“Their broad experience and knowledge within the technology and financial services sectors will be invaluable as we combine CYBG and Virgin Money and become a major disruptor in UK banking.

“We are being ambitious, but I am confident we have the right team in place to deliver on our financial targets and grow our business throughout the UK.”