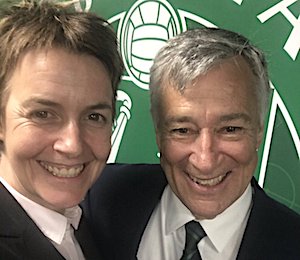 Hibernian FC announced on Tuesday that the majority shareholding in the club has passed from HFC Holdings Limited – owned by Tom Farmer and Rod Petrie – to Bydand Sports LLC, a new company set up for that purpose by US businessman Ronald Gordon.

Following the transaction around one third of Hibernian Football Club will be owned by existing shareholder supporters with Gordon becoming the new majority shareholder.

Rod Petrie has stood down from the board of the club after 22 years — 15 of them as chairman.

“The historic transfer of ownership has taken place with Ron’s company acquiring the shares in the club held by HFC Holdings Limited and making a further cash investment in the club,” said Hibernian.

The club said Gordon will now become executive chairman of Hibernian and that Farmer and Gordon “worked together in the transaction to eliminate the club’s mortgage debt.”

Hibs said Gordon is making a seven-figure cash injection into the club and HFC Holdings has transferred the ticket office and 15 acres of land to the club.

Farmer said: “From the day supporters asked me to get involved to help save the club back in 1991 this day was always going to come.

“After almost 30 years the approach from Ron has struck a chord and the time is right to transfer the stewardship of our great club.

“I want to pay tribute to Rod Petrie who has been integral to the building of the club.

“Together we picked up the pieces from the receivers of its parent company when the club had nothing and after 28 years of hard work we leave this club significantly better off than when we walked through the doors all those years ago, with a 20,000 all-seater stadium that is one of the best in Scotland, a first-class training centre and no debt.

“There have been approaches over the years, and we have done them all the courtesy of hearing what they had to say.

“Ron’s passion for Hibernian and its origins and his commitment to the community and the engagement he wants with supporters shone through.

“The directors of the cub met Ron so that they could hear and assess his plans and the investment on offer.

“It was good to hear their enthusiasm and excitement for how Ron can help take the club forward, building on all we have created in the last 28 years.

“It is also important to recognise the work of all the board members over those years.

“This is an unpaid position and often a thankless task, but to all those directors, past and present, I give my thanks.”

Gordon said: “I know that Hibernian is the right club for me, and I am committed to working with supporters, other shareholders and everyone connected with Hibernian to build on Sir Tom’s legacy and take the club forward.

“I had a great first conversation with Sir Tom. We swapped stories from our childhood and compared our approach to business.

“There are many similarities and those values are evident in Hibernian not only as an outstanding football club but also its engagement with young people and through the Hibernian Community Foundation.

“That it is such a well-run club was one of the major attractions for me.

“I am looking forward to getting to know the supporters and shareholders as quickly as possible, hearing what they have to say and then working with them to help the club build a successful future.

“And I will be there as often as I can to support the team!”

Petrie said: “In agreeing this transition, Sir Tom and Ron have put the football club first and everyone should recognise and applaud that.

“The legacy of Sir Tom’s tenure is not just the club’s infrastructure — our magnificent stadium and training centre — but also the imperative that the club should live within its means to ensure its stability and well-being.

“During that time, the club reached 9 cup finals, won the League Cup twice and the long-awaited Scottish Cup in 2016.

“There were also 10 campaigns in Europe.”

Hibs CEO Leeann Dempster said: “Everyone at the club is excited about the future.

“Ron is a man who loves football and who is determined to bring a bright future to the club.

“He buys into everything we are trying to achieve at Hibernian through our structure and our vision and he brings a wealth of experience in business to add value to that.”

Gordon was the founder and majority shareholder of ZGS Communications, Inc., a broadcasting and media company serving the Spanish-speaking community in the United States.

ZGS was sold to Comcast/NBC Universal in 2017.

Gordon is also a founder and director of John Marshall Bank, a community bank serving the Washington, D.C. metropolitan area.

Hibs said Gordon was born and raised in Peru “and is also proud of his Scottish heritage.”

His grandfather emigrated to Peru in 1908.

He formed Bydand Sports LLC based on the motto of Clan Gordon, derived from “Bide and Fecht” meaning “stay and fight.”