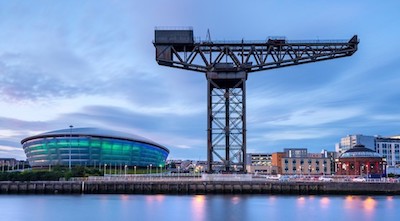 Scotland reinforced its position as the most attractive location for inward investment to the UK outside of London in 2019 with a 7.4% increase of foreign direct investment (FDI) projects.

That’s according to the 2020 EY Scotland Attractiveness Survey.

The survey showed 101 inward investment projects were secured in Scotland in 2019, up by seven (7.4%) from 94 projects the previous year.

The report revealed a welcome rebound in FDI projects last year following a decline in 2018.

Scotland’s three largest cities all experienced an increase in FDI projects in 2019 — Aberdeen increased by 88%, Edinburgh by 10% and Glasgow by 21%.

All three appeared in the top 10 most attractive cities for inward investment in the UK, excluding London.

Glasgow overtook Edinburgh as Scotland’s leading city to sit in third position behind Manchester and Birmingham while Edinburgh held firm in fourth and Aberdeen rose from tenth to seventh.

“Scotland has established a comparatively strong position within the UK in terms of attracting Foreign Direct Investment (FDI) having recorded an increase in both the number and share of UK projects in 2019 …” said the report.

“Glasgow has bounced up the ranks to third most attractive UK city, excluding London, followed by Edinburgh in fourth and Aberdeen in seventh …

“Scotland also performed better in terms of job creation in 2019 than in recent years, rising from fifth in the UK in 2018 to second.

“Digital and business services have fallen from the top two places on the leadership in 2018 to joint third a year later.

“Leapfrogging ahead in 2019 was machinery & equipment (58% increase) followed by agri-food (78% increase) signaling the first time in a decade that the service sector has not ranked first or second.

“In terms of the type of activities carried out, manufacturing shared the top spot with sales & marketing as both secured 32 FDI projects in 2019.

“The former experienced an increase of seven while the latter decreased by ten.

“Scotland has a real strength in the diversity of projects it attracts with a healthy blend between manufacturing and services.

“The boost in manufacturing places Scotland as the UK leader for this sector.

“This, along with the growth in machinery & equipment and agri-food, plays directly into Scotland’s international reputation and capabilities within the food and drink market …

“The five largest contributors of investment projects for Scotland in 2019 were the US, France, Germany, Japan and Norway.

“The US extended its lead as the biggest single source of FDI, accounting for 35% of inward investment into Scotland (an increase of 1% from 2018).

“Investment into Scotland from France increased in 2019 to secure second largest share of FDI with 9% while across the UK French originated investment was down slightly.

“Germany, Japan and Norway complete the top five origins of FDI into Scotland with each accounting for 7% of the total …”