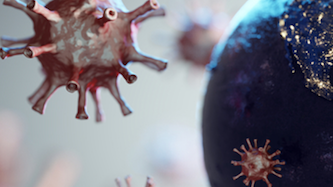 Omega said Bill Rhodes has stepped down as interim non-executive chairman with immediate effect, but remains a non-executive director.

Omega Diagnostics’ shares have soared more than 500% over the past 12 months amid its work on COVID-19 tests to give the Alva company a stock market value of around £150 million.

On trading for the current financial year ending March 31, 2021, Omega said group revenue is expected to be £9.3 million “with an EBITDA loss in the region of £2.1 million to £2.3 million.”

On the new contract, Omega said: “The intention is that as soon as the DHSC has access to a test that has successfully passed a performance evaluation, the test will be licensed for Omega to manufacture.

“As part of the contract, DHSC will loan a number of key pieces of manufacturing equipment.

“This will facilitate the necessary expansion in production capability in Omega’s Alva-based facility, to ensure the tests are made available as soon as possible.

“The company anticipates that the above actions will provide the company with capacity to produce approximately 2 million tests per week by the end of April, when combining the Government-loaned equipment with its own manufacturing equipment.

“Omega expects that this capacity will be sufficient to meet the expected demand for lateral flow COVID-19 antigen tests, with enough remaining capacity to be used for VISITECT CD4 or COVID-19 antibody tests according to demand.”

On its new chairman, Omega said: “Simon has been appointed to the board with immediate effect, after a thorough search process that was conducted with the help of Snedden Campbell Ltd.

“Simon has also become a member of both the audit committee and the remuneration committee.

“Simon has 25 years of board level experience at both early stage and public businesses within the diagnostics, life science and biopharma industries.

“Simon is currently non-executive chairman at AIM listed Fusion Antibodies plc, having previously served as its chief executive officer up until 2011.

“Simon holds a PhD in in-vivo diagnostics and an MPhil in Immunology, both from the University of Southampton.”

Douglas said:“I am delighted to be joining Omega at such an exciting time in their development and growth.

“I look forward to contributing to the continued growth of their core businesses in infectious disease with their lateral flow CD4 and Covid products, together with their food intolerance business, a market leader in this sector, both of which have an exciting future.”

On trading, Omega said: “The significant contribution to future performance expected from the DHSC contract above will impact the new financial year ending 31 March 2022.

“For the current financial year ending 31 March 2021, the company’s food intolerance division has held up well, despite the impact from pandemic lasting longer than originally thought.

“Revenue from COVID-19 activities is expected to be approximately £1.5 million which includes sales from the UK-RTC antibody test, sales of the Mologic ELISA antibody test and development income for work undertaken on behalf of a third party.

“In summary, group revenue is expected to be approximately £9.3 million with an EBITDA loss in the region of £2.1 million to £2.3 million.

“Despite the considerable investment in the scaling-up of our production capacity, the year-end cash position is expected to be in the region of £5.5 million to £6.0 million (2020: £0.6 million overdraft).”

In its outlook, Omega said: “The timing of the antigen supply contract with the DHSC coming so close to the deadline of the financial year-end means that it will have very little impact, if any, on the results for the year ended 31 March 2021 but the group expects that this supply contract will lead to significant volumes of tests being delivered over the coming weeks and months.

“Utilisation of our weekly production capacity for the supply of antigen tests under the DHSC contract is expected to have a significant impact on the future performance of the business and whilst volumes are unquantified at this stage it is likely to result in substantial revenue growth in the financial year beginning 1 April 2021.”

Omega CEO Colin King said: “We are delighted to formalise our relationship with the UK Government and to utilise our lateral flow test production capacity to support the COVID-19 mass testing programme being rolled out across this country.

“I appreciate that trading in our core business has been softer than expected for the current financial year, however the on-going opportunity for growth in CD4 testing and food intolerance revenues is unchanged.

“The new financial year will see this growth opportunity realised, and will also see the full impact of COVID-19 antigen testing, and so we are likely to deliver substantial revenue growth compared to this financial year which ends next month.

“These are very exciting times for the business and I am delighted that we can play a part in supporting the UK Government’s national effort to control the spread of the Coronavirus.”