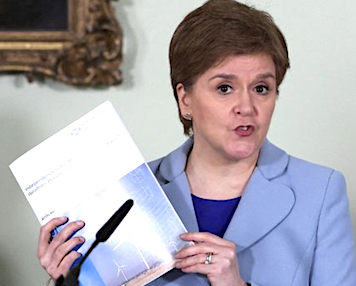 The Scottish Government has announced a combined rent freeze and moratorium on evictions to help people through the cost of living as the centrepiece of its 2022-23 Programme for Government (PfG).

The programme outlined emergency legislation which will be introduced to put in place a rent freeze until at least March 31, 2023, and a moratorium on evictions, as well as a new tenants’ rights campaign.

“With £3 billion allocated to the end of March for a range of support that will help mitigate the impact of the cost crisis on households, the PfG also confirms the Scottish Child Payment will increase to £25 per week per eligible child from 14 November when it also opens to all under 16s,” said the Scottish Government.

“In addition, the programme includes the roll out of free school meals across all primary school age groups, doubles the Fuel Insecurity Fund to £20 million to help households at risk of self-disconnection or self-rationing of energy, confirms rail fares will be frozen until March 2023 and widens the Warmer Homes Fuel Poverty Programme.”

First Minister Nicola Sturgeon said: “This Programme for Government is published in the context of the most severe cost crisis in many of our lifetimes. It is a crisis pushing millions into poverty and poses a genuine danger, not just to livelihoods, but to lives.

“The Scottish Government is already committed to a range of measures, worth almost £3 billion this year, that will help with rising costs. But the magnitude of what is being experienced by people and businesses means that mitigation is nowhere near sufficient. What is needed now is action on a scale similar to the initial Covid response.

“Regrettably, the powers to act in the manner and on the scale needed do not lie with this Parliament. In my view, they should lie here. If they did, we could have acted already. But they don’t. These powers are reserved to Westminster.

“The cost crisis means this Programme for Government is more focussed than ever before – deliberately so – with priority actions to provide help now.

“To that end we will provide more help for people who may be at risk of self-rationing or even self-disconnection from their energy supply and we will double the Fuel Insecurity Fund to £20 million this year.

“We will also propose emergency legislation to put in place a rent freeze until at least March and a moratorium on evictions.

“Given the powers to act in the manner and on the scale needed do not lie with this Parliament, this Programme for Government also provides for a Scottish Independence Referendum Bill.

“Independence would give us – like it does other independent countries – the levers we desperately need to respond to a crisis such as this. That’s the prize we surely must grasp.”