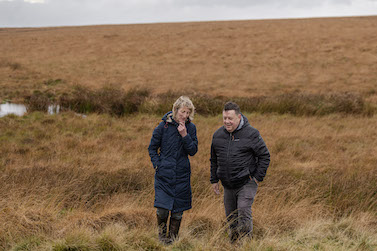 Beam Suntory, owner of the Laphroaig, Bowmore and Teacher’s whisky brands, has announced a new partnership with the Royal Society for the Protection of Birds (RSPB) for the restoration of peatland in East Ayrshire in Scotland.

“This marks the start of the second phase of the Peatland Water Sanctuary (PWS) initiative, a joint $4 million conservation project launched in 2021 by Beam Suntory and its parent company, Suntory Holdings,” said the drinks company, which owns dozens of global brands including Jim Beam, Maker’s Mark and Courvoisier.

“Beam Suntory will contribute more than £400,000 to restore and regenerate approximately 160 hectares of peatland at the Airds Moss reserve in East Ayrshire, Scotland which is owned by RSPB Scotland.

“Restoration will take place over four years and the partners will provide annual updates on the impact of the project.

“The first year will involve extensive fieldwork; completing surveys and analysis to design a restoration plan.

“Physical work is expected for winter 2023, at which point work will be carried out to re-establish original peatland vegetation to promote the regeneration of peat.

“This restoration builds on the success of the first stage of the PWS initiative, which began with work to restore and conserve peatland near the Ardmore distillery in November 2021.

“Since then, approximately 13 hectares of peatland have been successfully restored in partnership with the James Hutton Institute and Forestry and Land Scotland.

“An expansion of the Ardmore PWS project is currently being scoped.

“Beam Suntory is also keen to improve education and awareness about the importance of peat and biodiversity and recently ran a peatland restoration training event at its Laphroaig Distillery on Islay.

“The company is planning to replicate the event at further sites across Scotland.”