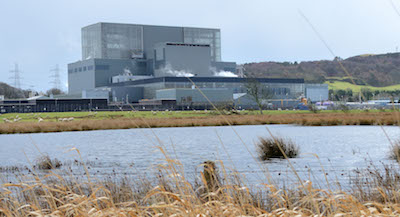 France’s EDF said on Thursday it will begin decommissioning its Hunterston B nuclear power plant in North Ayrshire by January 2022 at the latest.

The plant had regulatory approval to operate until March 2023 — but both reactors were taken offline in 2018 after cracks were found in the graphite bricks that form the reactor core.

Once Hunterston B stops generating power, EDF will take on the next task of defuelling the station, the first stage of the nuclear decommissioning process.

The defuelling process is expected to take a few years to complete.

“EDF has received approval to start generating low carbon power again from one of the reactors at Hunterston B power station in Ayrshire, Scotland,” said EDF.

“This follows a major, two-year inspection and investment programme to prove that the station can respond safely to a range of earthquake scenarios, far worse than the UK has ever experienced or expects to occur.

“Given the age of the station and the desire to provide clarity for our staff, the community and business partners, EDF has decided that Hunterston B will move into the defuelling phase no later than 7 January 2022.

“This is subject to a further inspection in Spring 2021 and then regulatory approval for a final 6 months of operation.

“Hunterston B started generating low carbon electricity in 1976. In 2012 EDF extended the generating life of the station out to March 2023, with a +/- 2 years proviso.”

Matt Sykes, Managing Director for EDF’s Generation business, said: “Hunterston B has quietly delivered a major contribution to the UK for more than 40 years.

“It has far exceeded its original remit and, over its lifetime, gone on to safely produce enough low carbon energy to power the whole of Scotland for eight years.

“We didn’t know back in the 1960s, when these plants were designed, just how important low carbon energy would become.

“We owe all those that designed, built, commissioned and still operate the station a huge debt of gratitude.

“Our focus is on continuing to safely deliver the last period of power generation and then transition the station into decommissioning.”

The UK’s Office for Nuclear Regulation (ONR) said it has provided EDF Energy Nuclear Generation Ltd (EDF NGL) with permission for Reactor 3 at Hunterston B to return to service for a limited period of operation.

“The permission is for up to a total of 16.425 Terawatt days, approximately six months’ operation … ” said the ONR.

“Through assessment of EDF NGL’s safety justification, which takes into account the expected ageing of the graphite core, our inspectors are satisfied that there are sufficient safety margins and defence in depth measures in place to ensure public and worker safety throughout the further period of operation.”

Donald Urquhart, ONR Deputy Chief Inspector, said: “This has been a detailed and complex assessment in which my team of specialist inspectors has rigorously assessed and scrutinised the safety case and underpinning evidence provided by EDF NGL.

“This work has taken more than two years, and I am grateful to my team for the diligent and professional manner in which this has been done.

“I am satisfied that the detailed safety justification provided by the licensee is sufficient to demonstrate that Reactor 3 can operate safely for this period of operation.

“We applied stringent national and international standards when making our decision, have scrutinised the nature of the cracking observed in Reactor 3 and are satisfied that it will not prevent the reactor from operating safely or impede its ability to be shutdown if required during this period of operation.

“As the independent nuclear regulator, our sole priority is the safety of site workers, local residents and the wider public who rely on ONR to regulate such safety matters.

“We will only allow nuclear facilities to operate if we are satisfied that they are safe to do so.”

The union Unite’s Scottish Secretary Pat Rafferty said: “This is sad news but not unexpected for the dedicated and loyal staff who have provided decades of safe, reliable, low carbon electricity for Scotland.

“Unite will continue to work with EDF over the coming months to ensure a just transition for the workforce to ensure these highly skilled members are retained”.

Unite National Officer for the energy and utilities sector, Peter McIntosh, said: “It’s vital now that the UK Government commit to replacing the Advanced Gas-cooled Reactor fleet and give a clear commitment, building new nuclear power stations at Sizewell B in Suffolk and Moorside in Cumbria”.