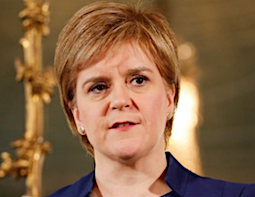 Scotland’s First Minister Nicola Sturgeon said on Thursday night the “hard” Brexit deal announced by UK Prime Minister Boris Johnson appears to have broken major promises on fisheries and that the deal is “damaging and disrupting this nation’s economy and society at the worst possible time.”

Sturgeon said Scotland “now has the right to choose its own future as an independent country” and once more regain the benefits of EU membership.

The Brexit deal will allow for tariff and quota-free trade in goods after December 31, but it will not apply to the services industry which makes up about 80% of the U.K. economy, or the financial services sector.

The agreement means that most goods traded between the EU and UK will not face new tariffs or quotas.

However, UK exporters will face a number of new regulatory hurdles that will make it more expensive to do business in Europe.

For financial firms, the agreement did not include a decision on “equivalence” — which would allow firms to sell their services into the single market from the UK.

“It beggars belief that in the midst of a pandemic and economic recession Scotland has been forced out of the EU Single Market and Customs Union with all the damage to jobs that will bring,” said the First Minister.

“A deal is better than no deal. But, just because, at the eleventh hour, the UK Government has decided to abandon the idea of a no-deal outcome, it should not distract from the fact that they have chosen a hard Brexit, stripping away so many of the benefits of EU membership.

“And while we do not yet have full details on the nature of the deal, it appears major promises made by the UK Government on fisheries have been broken and the extent of these broken promises will become apparent to all very soon.

“People in Scotland voted overwhelmingly to remain in the EU, but their views have been ignored.

“This is a far harder Brexit than could have been imagined when the EU referendum took place, damaging and disrupting this nation’s economy and society at the worst possible time.

“We are doing everything we can to mitigate against the consequences of the UK Government’s actions – but we cannot avert every negative outcome.

“We know that businesses are already struggling under the burden of COVID-19, and are now faced with the need to prepare for this hard Brexit in little more than a week’s time.

“We will do all we can to help them and are issuing updated information and advice and urge those most affected, including businesses, to prepare.

“Scotland did not vote for any of this and our position is clearer than ever.

“Scotland now has the right to choose its own future as an independent country and once more regain the benefits of EU membership.”

Elspeth Macdonald, chief executive of the Scottish Fishermen’s Federation, said that while the full details of the Fisheries Agreement reached between the UK and the EU had yet to emerge, it did not appear on the surface to deliver on the industry’s aspirations.

“What has been outlined so far is that full access will be granted to EU vessels for effectively six years from January,” she said.

“Over the same timescale the increase in quota shares for UK vessels will be 25 per cent.

“The Government has not yet provided the full text of the agreement or how this increase will apply to particular species, so it is very difficult to make a detailed assessment of the impact on our industry.

“However, the principles that the Government said it supported – control over access, quota shares based on zonal attachment, annual negotiations – do not appear to be central to the agreement.

“After all the promises given to the industry, that is hugely disappointing.

“We expect to be able to study the detail in the coming days and will issue a further statement when we have been able to do so.”

Tavish Scott, chief executive of the Scottish Salmon Producers Organisation (SSPO) said: “We are pleased the negotiators have at last secured a deal.

“This will alleviate some of the serious problems that would come from a ‘no deal’ Brexit.

“But we still have concerns.

“The disruption at the Channel right now is hitting our members ability to export.

“Brexit means the Scottish salmon sector now face the reality of lots more red tape, bureaucracy and paperwork which are the reality of the extra trade barriers which come with Brexit.

“So until we see how this UK-EU agreement actually works in practice, it is impossible to make a clear judgement on how the new trading arrangement in 2021 will affect salmon farming.”

“We will now need a common-sense approach to the application of new rules and new border procedures from 1 January to help businesses manage the transition smoothly.

“The UK Government and EU Member States will need to be flexible with producers, logistics companies and importers as they get to grips with the significant changes that will take effect in just seven days’ time.”

Scottish Financial Enterprise CEO Sandy Begbie said: “I welcome that a post-Brexit trade deal has been agreed between the UK and the EU, particularly the much-needed clarity this will give many businesses across Scotland who export goods to the EU.

“Our member firms have been assessing the potential impact of Brexit since the result of the referendum in 2016 and, where necessary, have taken steps to ensure they adapt to meet any changes this will bring.

“Many of our members have significant interests across the EU so it is therefore all the more important a smooth ratification process now takes place and that further work to cooperate on shared issues is embarked upon.”

Nigel Green, CEO of financial advisory firm deVere Group, said: “Let’s be very clear: this is not the end of Brexit.

“Now there will need to be a period of major readjustment as the world’s sixth-largest economy diverges from the world’s largest trading bloc after being an integral part of it for almost half a century.

“In addition, Britain now has to move quickly to secure new trading relationships – but these are always complex and lengthy to establish.

“Also, it is likely that influential political voices in other European nations will be further emboldened and will push harder for their countries to leave the EU or radically reform it, creating further geopolitical tensions.

“As economies and businesses adapt to the considerable changes of a post-Brexit world, investors must expect disruption and uncertainty that will create volatility in the markets …

“Whilst better than nothing, this UK/EU deal is a thin and narrow one.

“It only covers goods, not services, which account for 80% of the UK economy – and even with an agreement for goods there will be additional rules and further costs.”