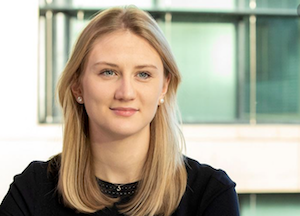 Bentley joined Baillie Gifford in 2016 and has worked across a variety of strategies including International Growth, UK Equity and High Yield Bond.

Bentley graduated in music from the University of Oxford in 2014.

“Since joining the European Equities team in 2019 she has become a valuable analytical resource, as well as an important contributor to the team’s stock picking process,” said Baillie Gifford.

James Budden, director of Retail Marketing & Distribution, Baillie Gifford, said: “Josie has quickly established herself as part of the European Equities team and has contributed significantly to idea generation.

“Currently top of its sector over the past year and with a similar long-term track record, the fund has proved very popular, and Josie’s appointment will both diversify the management team and enhance its investment proposition.

Baillie Gifford’s assets under management have soared in the past year — from around £197 billion in March to a current £335 billion.