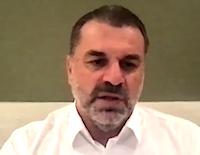 Shares of Celtic plc rose about 3% on Thursday after it announced the appointment of former Australian national team head coach Ange Postecoglou as the club’s first team manager on a 12-month rolling contract with immediate effect.

Celtic shares edged higher to around 113p to give the company a current stock market capitalization of almost £107 million, according to Reuters data.

Previously, he won Premiership and Championship Titles in Australia’s A League.

“As head coach of the Australian National team, Ange lifted the Asian Cup in 2015, the first time the country had ever won this title,” said Celtic.

“Ange also managed the Australian national team at the FIFA World Cup in 2014 in Brazil and led Australia to qualification in 2018 in Russia.

“A modern, progressive coach with exciting, attacking football as his philosophy, Ange has received a host of prestigious coaching accolades, including being named as Australia’s PFA Manager of the decade in 2015.

“Ange has successfully achieved UEFA recognition and endorsement in relation to his Pro-Licence issued by Football Australia.

“He begins working immediately and will be arriving in Glasgow as soon as current protocols allow.

“Ange will meet up with the squad at Lennoxtown and will then lead the team to the club’s pre-season training camp.

“Ange is delighted to join the club and take up one of the biggest jobs in world football, and having signed a 12-month rolling contract.”

Postecoglou said: “The opportunity that has been given to me is one of the greatest honours in football and the responsibility to lead our magnificent football club into the future is one that I will cherish dearly.

“Celtic is one of THE names in world football, of that there is no doubt – a giant of a club, a proper footballing institution and so much more – real history, real substance, real authenticity and real soul.

“I know Celtic is a true way of life for so many people and I know the demands which come with this position – I am ready to do all I can to meet those demands.

“I will be doing everything I can to get our great club back on top and, at the same time, deliver the kind of football which our fans appreciate.

“We want to entertain our fans and we want to win, these are the objectives which I always set myself and which I now begin work on.

“When you think of Celtic, you think of supporters and my dream is to see our fans back at Celtic Park with us as soon as possible.

“We all hope things are changing for the better and can see our fans soon as they are vital to everything I want to do.

“We need our supporters back by our side and I can’t wait to be with them back in a packed Paradise.

“I have already had great discussions with Peter, Dom and the board about their ideas and strategy for the future of the club.

“I know the Club’s new modern vision aligns very much with mine and we now look to go and deliver on this.

“In everything we do we aim to give our fans a successful team of real quality, which they are excited about and can be proud of.

“We have already begun work on our plans for adding to the squad – we aim to bring players of quality to Celtic to enhance the existing core of great talent.

“I very much look forward to meeting with the players on their return from the close season break and I can’t wait to get started as Celtic manager.”

Outgoing Celtic chief executive Peter Lawwell added: “Ange is a manager we have known about for a number of years and someone who has been prominent in our thoughts for some time.

“He is a great coach who has attractive, winning football in his DNA.

“He has an excellent record, he is a very strong personality and someone with a real desire and passion to take Celtic forward.

“I wish Ange and Dominic all the very best for the future and I am sure they will work towards delivering great success to the club and our supporters.”

Incoming Celtic chief executive Dominic McKay added: “I am delighted we have been able to secure Ange as the new Celtic Football Manager.

“In all our discussions, I have been hugely impressed by Ange and his aligned vision to work with me to develop and evolve the club, focused on bringing back sustained success.

“He is someone I believe has the coaching and managerial credentials to be a real success at Celtic and we are already working closely together on our plans for the season and seasons ahead.

“Throughout all our conversations I have been struck by Ange’s passion for Celtic and his strength of feeling for Celtic, he is hugely motivated by this opportunity, honoured to be Celtic Manager and eager to be part of the club’s future success.

“Our discussions have also outlined the exciting vision he has for the team.

“He is someone who wants to play football the way all Celtic supporters love, an ambition very close to his heart.

“Ange is also very well-connected in global football, contacts which I am sure we will benefit from, he has a modern outlook and he shares my desire to evolve the club positively for the seasons ahead.

“Importantly, he is also someone we believe who has the mentality and strength of character to lead a club of Celtic’s size and stature.

“Everyone at Celtic is pleased to welcome Ange and we look forward to working with him to bring our fans the success which their support deserves.”

Celtic chairman Ian Bankier said: “We are delighted to welcome Ange to Celtic.

“He is a quality manager with an excellent record and someone whom we believe has the ability, desire and passion to deliver success to our supporters.

“He has huge ambition and a passion to be the best in everything he does – his real desire to lead Celtic as manager is very clear.

“We will give Ange every support as we look to prepare for the coming season and beyond and we will be doing all we can to work with him to bring our supporters as much success as possible.”