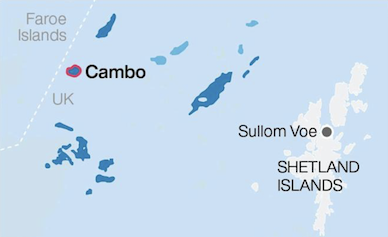 Siccar Point Energy CEO Jonathan Roger said on Friday that Royal Dutch Shell’s decision last week not to go ahead with the Cambo oilfield project west of Shetland means the development will have to be paused.

Aberdeen-based Siccar, which owns 70% of Cambo, said: “Shell remains 30% joint venture partner” and that discussions with Shell and wider stakeholders continued but added that the project was “on hold in the short-term.”

Shell said on December 2 it concluded the economic case for investment in Cambo “is not strong enough at this time.”

Roger said: “Following Shell’s announcement last week, we are in a position where the Cambo project cannot progress on the originally planned timescale.

“We are pausing the development while we evaluate next steps.

“We continue to believe Cambo is a robust project that can play an important part of the UK’s energy security, providing homegrown energy supply and reducing carbon intensive imports, whilst supporting a just transition.”

GMB, the energy union, says the decision to pause the Cambo oil field project amounts to a “surrender of the national interest.”

GMB said Cambo was expected to have delivered 170 million barrels of oil equivalent and 53.5 billion cubic feet of gas during its 25-year operational life – enough to power 1.5 million homes for a year.

The union said latest OGUK research shows in the year to June, the UK paid almost £20 billion to other countries for oil and gas imports —  including Norway, Russia, Qatar and the US.

GMB General Secretary Gary Smith said: “It’s meant to be a transition to a low carbon economy, not a surrender of the national interest.

“The cheerleaders for Cambo’s shutdown aren’t just throwing energy workers under the bus, but also our security of supply for the gas we will still need on the road to 2050.”

The party’s shadow secretary for net-zero Liam Kerr said: “The hostile SNP-Green stance on projects like Cambo is making it less attractive for energy companies to invest in Scottish oil and gas.

“It’s clear the shameful, ignorant, anti-business views of this coalition are now not only jeopardising our ability to meet net-zero targets but also abandoning thousands of jobs in the sector.

“Without investment in these projects, we risk becoming even more dependent on foreign imports rather than making use of Scotland’s domestic reserves of oil and gas.

“We warned bringing the extremist Greens into Government would damage Scotland’s economy and the effects of this are now being seen.”