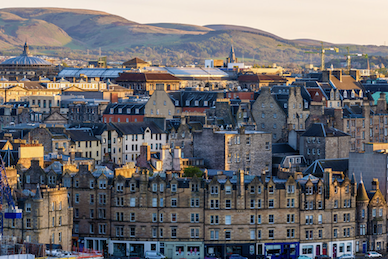 Property investment volumes in Scotland reached £460 million in the first quarter of 2022, up from £380 million a year ago, but 20% below the five-year quarterly average of £570 million.

Cross border capital accounted for over 60% of all activity, one of the largest shares on record.

That’s according to the latest report from Collliers Scotland.

At £140 million, retail investment accounted for 30% of all activity by value.

Aberdeen attracted £160 million of investment in Q1, considerably higher than its average of £40 million, while £150 million was transacted in Edinburgh.

“Retail warehouses traded particularly well and the £105m transacted in Q1 is 74% above the five-year quarterly average of £60m,” said the report.

“The largest transaction was Realty Income’s purchase of the 225,000 sq ft Beach Boulevard RP in Aberdeen for £60m, reflecting a yield of circa 6.25%.

“It was the largest retail transaction in Aberdeen since 2013.

“Yields are compressing across all main retail segments, according to the monthly MSCI index.”

On office investment, the report said: “After annual investment sales volumes in the office sector improved slightly from 2020’s nine-year low of £380m to £490m in 2021, activity was subdued in Q1, with only one significant office transaction recorded.

“Kennedy Wilson acquired Edinburgh’s Waverley Gate for £78m at 5.66% IY. The 203,400 sq ft office building’s tenants include Amazon, Microsoft and the Scottish Government and has an occupancy rate of 97%.

“Elsewhere, LXI REIT signed a forward-funding deal for BT’s new office in Dundee as part of a £57m portfolio which also included car storage. The 77,000 sq ft office will house up to 1,000 staff when completed.

“Activity should pick up over the coming months, with Apollo Global Management in advanced talks to purchase £120m innovation hub in Edinburgh.

“Office yields across Scotland have softened in Q1, according to the monthly MSCI index.”