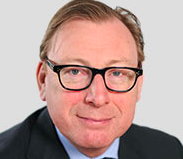 Tesco Bank chief executive Benny Higgins is to succeed Ben Thomson as the new chair of the National Galleries of Scotland (NGS) board.

The appointment is part time and non-remunerated with a time commitment of three to four days a month.

Higgins was formerly a top executive at RBS, HBOS and Standard Life.

“I am pleased to welcome Benny Higgins as the new chair of the Board of Trustees of the National Galleries of Scotland,” said Fiona Hyslop, the Scottish government’s cabinet secretary for culture, tourism and external affairs.

“Having served as a member of the NGS Board for three years now, he has been a real asset to the organisation, bringing in a wealth of experience and business acumen.

“Building on the legacy of the current chair Ben Thomson, under whose leadership NGS has flourished into an organisation of international reputation, I am confident that he will pursue the board’s good work and ensure that the NGS will continue to inspire a wider national and international audience through its innovative programme of exhibitions and activities.”

Higgins is chief executive of Edinburgh-based Tesco Bank, group strategy director for Tesco plc, and a member of the Tesco executive committee.

Higgins began his career at Standard Life in 1983 where he joined as an actuarial student and became a member of the Standard Life group executive in 1996.

In 1997, he moved to Royal Bank of Scotland (RBS) to become its chief executive of retail banking, during which time he led the integration of NatWest retail banking.

Higgins became CEO of the retail business of HBOS plc in 2006, before joining Tesco Bank as chief executive in 2008.

Higgins holds a First Class Honours degree in Mathematics from the University of Glasgow and became a Fellow of the Faculty of Actuaries in 1986.

He is also a non-executive director of the Buccleuch Estates, a trustee of the Edinburgh International Culture Summit and a Prince’s Trust Ambassador.

Higgins’ appointment, which is regulated by the Commissioner for Ethical Standards in Public Life in Scotland, will run for four years from July 1, 2017 to June 30, 2021.