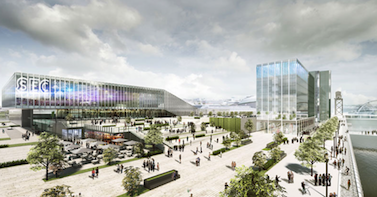 The Scottish Event Campus (SEC) in Glasgow said it has applied for planning permission in principle (PPIP) for a £200 million expansion of its facilities “with a vision to create a unique global event campus capable of taking the world’s top conferences, exhibitions and events.”

The project includes a dedicated entrance to the west of the campus and additional multi-purpose meeting and circulation spaces with panoramic views of the city and River Clyde.

It is estimated that “in a mature year” the new facilities would generate £123 million of economic benefit to the Glasgow area, £106 million to Scotland and £71 million to the UK.

This would be in addition to the £400 million of impact for Glasgow, £227 million for Scotland and £136 million for the UK generated annually from the existing facilities.

It is estimated that economic payback for the tax payer would be within five to seven years.

“However, competition worldwide is robust and constantly evolving.

“In order to maintain this level of success we need to invest in our product to ensure we have the best facilities.

“The plans for this expansion will fulfil this and create a truly unique UK Event Campus which will be world class.

“During the past two decades, Glasgow and the SEC have succeeded in the conference market and strong, city-wide partnerships have been instrumental in securing business.

“It is widely recognised that events drive immediate economic benefit of scale for cities and countries.

“Conferences and Exhibitions in particular, provide a catalyst for further long-term economic benefit.

“The focus now is to secure funding support for the project which will be of significant benefit to Glasgow, Scotland and the UK’s economy”.

Glasgow Chamber of Commerce chief executive Stuart Patrick said: “The SEC constantly secures a stream of major conferences and is an enormous asset to the city, keeping Glasgow firmly on the world stage.

“But in a highly competitive sector venues must constantly evolve, and this imaginative planned expansion will help ensure the city’s share of the conference and exhibition markets continues to grow.”

The application is the next step following a previous feasibility study which was carried to establish viable options for upgrading and expanding the campus, principally to facilitate further growth in the Conference and Exhibition sectors.

“It was also supported by a robust business plan and economic impact study as the rationale for the new facilities.”