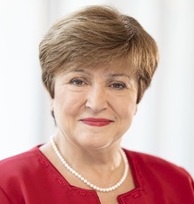 New International Monetary Fund managing director Kristalina Georgieva issued a warning about the state of the global growth on Tuesday.

She warned trade conflicts had thrown global growth into a “synchronized slowdown” and must be resolved.

In her inaugural speech, Georgieva unveiled new IMF research showing that the cumulative effect of trade conflicts could mean a $700 billion reduction in global GDP output by 2020 — or roughly 0.8%.

The research takes into account US President Donald Trump’s tariff increases on remaining Chinese imports — about $300 billion worth of goods.

Georgieva said much of the GDP losses will come from a decline of business confidence and negative market reactions.

“In 2019, we expect slower growth in nearly 90 percent of the world,” said Georgieva.

“The global economy is now in a synchronized slowdown.

“This means that growth this year will fall to its lowest rate since the beginning of the decade.”

The Bulgarian economist said trade had “come to a near standstill.”

She warned that fractures in trade could lead to changes that last a generation, including “broken supply chains, siloed trade sectors, a ‘digital Berlin Wall’ that forces countries to choose between technology systems.”