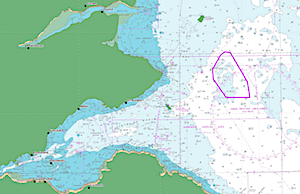 French state-owned energy company EDF said on Thursday it has launched the construction of the £2 billion Neart na Gaoithe wind farm off the coast of Fife along with new Irish partner, ESB.

The news followed trade publication speculation that Mitsubishi Corporation would take a big stake in the project.

Neart na Gaoithe will consist of 54 turbines and when fully operational the offshore wind farm will generate the equivalent electricity to power over 375,000 households each year — about 4% of Scotland’s electricity consumption.

EDF said construction of components is now underway, offshore construction will start in June 2020 and full commissioning will be complete in 2023.

“Some foundations jackets will be built by the Scottish engineering firm BiFab.

“The wind turbine generators will be assembled at the Port of Dundee.

“Eyemouth Harbour has been selected as preferred supplier to operate and service the wind farm over its 25-years lifetime.

“More precisely, this activity will create around 50 permanent jobs, located nearby the wind farm.”

Bruno Bensasson, CEO of EDF Renewables said: “We are pleased to get work underway with our new partner ESB and all Scottish companies and stakeholders involved.

“The 450 MW NnG project will play an important role in de-carbonising the UK electricity system.”

“Offshore wind is one of the main technologies underpinning the clean electricity systems that will power our societies into the future.

“This investment in the Neart na Gaoithe project builds on significant ESB involvement in offshore wind off the Irish coast as ESB develops its experience to assist Ireland deliver its Climate Action Plan.

“We look forward to pooling our expertise with EDF Renewables in delivering this major project.”

This fully consented offshore wind project has a 15 year Contract for Difference (CfD) at £114.39/MWh in 2012 pound sterling, and grid connection agreements in place.

GMB Scotland union Secretary Gary Smith was skeptical on the benefits of the project for local workers in Fife, saying: “The yards in Fife have been lying almost empty for 18 months so something is better than nothing, but it’s hardly the green jobs revolution.

“The overwhelming majority of a contract based just ten miles from the Fife coast will be delivered over 7,000 miles away in Indonesia.

“If our politicians can’t see the problem in that then we’ve got no chance of building a meaningful renewables manufacturing sector.

“It’s also troubling to hear EDF claim Scotland doesn’t have the sufficient skills and contractors to build for all aspects of offshore wind construction.

“What has been happening in the twelve years since we were promised the Saudi Arabia of renewables?

“What will be our economic share of the total project value?

“How many jobs will be supported and for how long?

“What will this mean for the Arnish yard where redundancies have been steady since the wind down of the Moray East contract?

“Based on this morning’s reports, it doesn’t look good enough.”