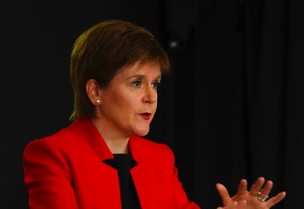 “Before the end of this parliament, we will publish a draft bill setting out the proposed terms and timing of an independence referendum as well as the proposed question that people will be asked in that referendum,” said Sturgeon.

The announcement came as part of Sturgeon’s programme for government statement.

The First Minister announced the creation of a £100 million Green Jobs Fund and confirmed a Youth Guarantee scheme which will see £60 million of Scottish Government money help provide those aged 16 to 24 with either a job or a place in education or training.

A National Transition Training Fund will support up to 10,000 people at risk of redundancy or unemployment.

To promote the environment and encourage people towards healthier lifestyles, Sturgeon promised £500 million of investment over the next five years to support active travel, such as walking and cycling.

Sturgeon said: “This is a programme for government which prepares us for what may well be a difficult winter.

“But it also encourages us to lift our eyes, find hope in our hearts, and plan for brighter days ahead.”

“We need to take Scotland forward and recover from this crisis together, not go back to the divisions of the past.”