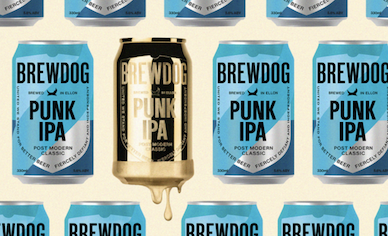 James Watt, CEO and co-founder of Aberdeenshire-based craft brewing firm BrewDog, said he has paid out almost £500,000 to winners of the company’s misleading “solid gold” beer can promotion.

“Inspired by everything Willie Wonka I decided that we should hide 50 gold cans in cases of beer.

“We found an amazing goldsmith to make the cans for us and when they arrived at the brewery we were blown away by how beautiful they were.

“Each winner would not only get to keep the can but would also receive £15,000 worth of BrewDog shares.

“However, I got so carried away in the excitement of the project that I made some costly mistakes.

“I falsely thought the cans were made from solid gold when they were indeed only gold plated.

“In my enthusiasm, I had misunderstood the process of how they were made and the initial tweets I sent out told customers of the prospect of finding ‘solid gold cans.’

“It was a silly mistake and it only appeared in around 3 of a total of 50 posts about the promotion but as it turns out, those 3 tweets were enough to do a lot of damage.

“Things started to go wrong when the winners got their cans.

“Despite the fact our valuation of £15,000 per can was accurate some of the winners had seen my earlier mention of ‘solid gold’ and complained when they realised they were only gold plated.

“The ASA (Advertising Standards Authority) got involved too and ruled that we had run a misleading promotion.

“And then it blew up into a media storm.

“A simple misunderstanding born from my excessive enthusiasm about the campaign launch morphed into a frenzy, with attacks coming in from all quarters.

“I should have been more careful. I should have checked things before I got carried away. But it was too late.

“It got pretty grim.

“The Gold Can saga was headline news.

“We were made to look dishonest and disingenuous and we took a real hammering online and in the press.

“My initial tweets had been misleading and we deserved the flak. What was looking like one of the best campaigns in our history was now, decidedly, the worst.

“This was my mistake and mine alone and it was on me to fix it.

“I had to find a way to make things right without the business to be punished for my error. So, I did something pretty radical.

“I got in touch with all 50 winners and let them know that if they were unhappy with their prize I would personally offer them the full cash amount as an alternative.

“Furthermore, I promised to fund this myself so the business did not have to suffer financially from my mistake.

“Those were 3 very expensive mistaken tweets that I sent out in my enthusiasm for our new campaign.

“It was a damaging episode for us and I am now the proud owner of 40  gold cans. Not quite sure what I should do with them.