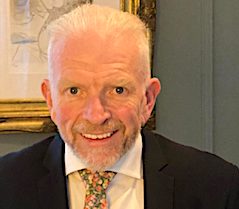 The role is a non-remunerated appointment and the first of two Business Advisor roles to be announced.

“He will work directly with the First Minister, identifying the priorities of the business community and helping shape the government’s support and response,” said the Scottish Government.

“The appointment comes less than a year since the publication of Scotland’s National Strategy for Economic Transformation (NSET), which sets out how the Scottish Government will maximise Scotland’s economic potential over the next 10 years.

“The creation of the role demonstrates the Scottish Government’s ongoing commitment to working in partnership with the business community and builds on the progress already made in delivering NSET plans for a wealthier, greener and fairer economy.”

Sturgeon said: “Breaking down the barriers between businesses and government and sharing ideas about what works and what doesn’t will help the Scottish Government to continue to support growth and deliver long term economic success for Scotland.

“Businesses are currently contending with the ongoing impact of Brexit and Scotland’s removal from the European single market, the cost crisis, and the transition to net zero – all at the same time as we recover from the repercussions of the pandemic.

“Ellis’s appointment will open up a constant, direct dialogue between government and the private sector so we can listen directly to what really matters to business people in Scotland.

“Ellis is an outstanding business leader with a successful track record in many high profile companies with an international reach.

“His support will be invaluable in setting an agenda that listens to business and creates an environment in which they wish to invest and develop talent in Scotland.”

Watson said: “Scotland’s economic success has never been so dependent on the health of our businesses.

“The private sector sometimes feel government is disconnected from their needs, and I’m determined to ensure we meet the challenges with a robust candour to reach our country’s commercial potential.”