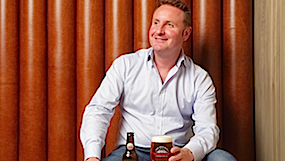 Innis & Gunn, famous for its oak infused beers and unoaked Scottish lager, will investing to further develop the Perth brewery and to create a new state-of-the-art Innis & Gunn brewing and maturation facility.

Innis & Gunn’s expansion plans will be accelerated by the brewer choosing to invest in developing an existing brewery rather than building a new facility.

The new scale of production will help Innis & Gunn meet the growing demand for its beers, and the site offers room and flexibility for further expansion in the future as the company continues to grow.

“The acquisition of Inveralmond gives us the dedicated brewing facility that we need to meet the growing demand for our beers,” said Dougal Gunn Sharp, founder and master brewer at Innis & Gunn.

“It gives us a home where we can innovate and experiment with some of the new brewing processes we’ve been dreaming up.

“This is more than an Innis & Gunn brewery; we’re building a totem for innovation and a launch pad for our continued expansion at home and abroad.

“We’ve been friends with Inveralmond for years and I have huge respect for the beers that they make.

“Ossian, their lead beer, is available on draft at all of our Beer Kitchen bar-restaurants and sells brilliantly because of its amazing flavour, clarity and consistency.

“As we searched for a site for our new brewery, it became clear there was an opportunity to combine the strengths of both businesses and for us to acquire their brewery and brands.

“Taking over an already fantastic brewery gives us a rolling start in the development of our new state-of-the-art equipment and processes, meaning we can grow much faster than if we started from scratch.

“It means we’ve avoided a lot of the red tape and planning issues around building a site from the ground up and we can concentrate on what we do best — brewing beer.”

Fergus Clark, founder and managing director at Inveralmond said: “To me this feels like a real win-win.

“Our Inveralmond beers will gain access to a sales and distribution infrastructure that will massively accelerate the growth of our beers both at home and internationally, while at the same time Innis & Gunn gets the brewery they want 18 months earlier than if they had to build it themselves.

“We are really looking forward to starting to brew Innis & Gunn beers on site and seeing where this exciting stage of our combined development will lead.”