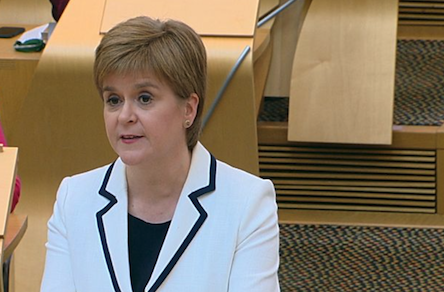 First Minister Nicola Sturgeon said on Wednesday that Scotland should hold an independence referendum before the current Scottish parliamentary term ends in May 2021 and that legislation will be prepared for this to happen.

Acknowledging that not all MSPs support independence, the First Minister has proposed cross-party talks to discuss which powers other parties believe should be transferred to the Scottish Parliament “to enable it to better protect Scotland’s economic and social interests.”

The First Minister also made clear that the Scottish Government will act now “to protect and progress the option for an independence referendum to be held by introducing a framework Bill, which will set the rules and principles for any referendum.”

The Scottish Government said: “This Bill will protect the option of an independence referendum within this parliamentary term.

“Once the Bill is passed it would only require the transfer of power at a later date via a Section 30 Order to proceed to a vote on independence.”

Sturgeon said: “There is, surely, one point of clarity that has emerged over the last three years – even for the most ardent opponent of Scottish independence.

“The Westminster system of government does not serve Scotland’s interests, and the devolution settlement, in its current form, is now seen to be utterly inadequate to the task of protecting those interests. In other words, the status quo is broken.

“Brexit has exposed a deep democratic deficit at the heart of how Scotland is governed.

“And – whatever our different views on independence – it should persuade all of us that we need a more solid foundation on which to build our future as a country.

“With all of our assets and talents, Scotland should be a thriving and driving force within Europe. Instead we face being forced to the margins – sidelined within a UK that is, itself, increasingly sidelined on the international stage.

“Independence, by contrast, would allow us to protect our place in Europe.”

The First Minister added: “It is now time for this Parliament, for all parties represented here, to take charge.

“The immediate opportunity we now have is to help stop Brexit for the whole UK – and we should seize that opportunity.

“But if that cannot be achieved, dealing with the consequences of Brexit and facing up to its challenges will be unavoidable.

“I believe that the case for independence is stronger than ever.

“And I will make that case. But I know others take a different view.

“So, as we take the necessary legislative steps over the next few months, I will also seek to open up space for us to come together and find areas of agreement as mature politicians should.

“We have seen in Westminster what happens when parties fail to work together – when leaders take a ‘my way or the high way’ approach and when so many red lines and inflexible preconditions are set that progress becomes impossible.

“Twenty years on from the establishment of this Parliament, I believe we can do better. Brexit makes change for Scotland inevitable.

“This place was established with the hope that it would be a new type of parliament. We can show that we are able to put the interests of the people first.

“So if others across this chamber are willing to move forward in that spirit, they will find in me an equally willing partner.

“But if all they have to offer the people of Scotland is a failed and damaging status quo, then the process of change will pass them by and support for independence will grow.”