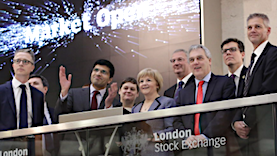 The Aberdeen City Region’s economy is showing signs of modest recovery and is forecast to grow in the years ahead, according to a major new report.

In 2018, average workplace earnings rose 3.5% in Aberdeen and 4.6% in Aberdeenshire, compared to Scotland’s 1% increase.

The independent report was launched on Tuesday at the State of the Cities Conference hosted by Aberdeen City Council.

Published by the Aberdeen Economic Policy Panel, the report examined the Regional Economic Strategy’s response to the recent oil downturn and in doing so reaffirmed the cautious optimism of last year’s inaugural report.

The report underlined the continuing significance of the oil and gas sector but stressed the need for diversification within both the energy sector and the wider North East economy, while welcoming the increasing focus on renewables, digital, life sciences, culture, and tourism.

Lumsden said: “We’re proud of a proactive and dynamic approach to economic development and will continue to push forward with our plans, buoyed by the evidence that the strategy is supporting the renaissance of the region.

“We will also continue to invest in digital infrastructure, roads, schools and thousands of new Council homes in all corners of Aberdeen as we focus on inclusive economic growth and the vision for a city where everyone can prosper.

“The increasing collaboration and partnership working we see is delivering results in innovation and industry.

“We have to build from the position of strength we are in and look forward with the same drive and determination that first established Aberdeen as an economic powerhouse.”

Laing said: “At the inaugural State of the Cities conference last year I spoke of our ambition to deliver projects that fostered inclusive economic growth for the people of Aberdeen and of our determination to do that at pace.

“In the 12-months since then the achievements have underlined that commitment.

“From the opening of P&J Live and Aberdeen Art Gallery to the investment in housing and schools, 2019 has been a year in the life of what I would describe as no ordinary city and an extraordinary council, delivering quite incredible achievements against the odds and with a backdrop of economic challenges that need no explanation.

“The message today is that we will not rest on our laurels and pledge as a Council to continue the journey we are on both socially and economically.”

Major infrastructure investment in the region includes the recently-opened Aberdeen Western Peripheral Route, the provision of digital infrastructure through the City Region Deal, and the planned expansion of Aberdeen Harbour.