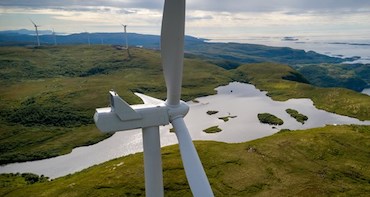 Danish firm Vestas, the world’s largest wind turbine maker, said on Wednesday it won a 443 MW order from SSE Renewables for the Viking wind project on the Shetland Islands.

Viking will be the largest onshore wind farm in the UK by output.

“With this landmark deal, Vestas reinforces its presence in the UK onshore wind market, where we have installed more than 2,000 wind turbines with a total capacity of more than 4 GW,” said Vestas.

The Viking wind project will be Vestas’ largest stand-alone wind park order in Europe to date.

“By using a turbine model known for its ability to withstand extreme wind conditions, this solution is an exceptional fit for the site’s strong winds that will maximise energy output for the site and simultaneously lower the levelised cost of energy.

“As part of the long-term service agreement for the Viking project, Vestas has the ambition to establish a Shetland Island based service organisation providing high quality employment opportunities supported by an apprentice programme.”

Paul Cooley, director of capital projects at SSE Renewables, said: “This contract represents another significant milestone for our Viking project.

“We are delighted to be working with Vestas again with whom we have a significant track record of project delivery.

“The optimised V117-4.3 MW machines provide the durability and performance that we require to ensure that Viking delivers to its full potential.

“Viking will be the largest onshore wind farm in the UK by output and will bring significant economic opportunities to Shetland and beyond.”

Nils de Baar, president of Vestas Northern & Central Europe, said: “The Viking project creates a highly competitive business case for our customer and sends a strong signal for economic growth and green recovery in Shetland Islands, the UK and beyond.”

Vestas said the Viking wind farm will harness the excellent wind conditions in Shetland to produce almost 2 TWh of energy each year – enough to power almost half a million homes annually and reduce carbon emissions by half a million tonnes each year.

“When complete, it will be the UK’s largest and most productive onshore wind farm in terms of annual electricity output, playing a crucial role in contributing towards the UK and Scotland’s net zero targets,” said Vestas.