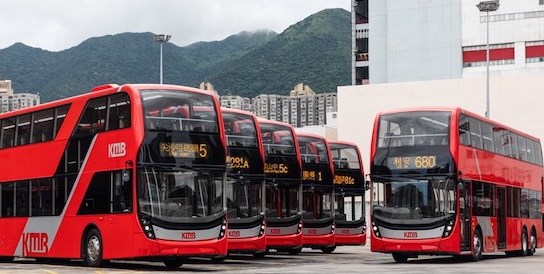 Falkirk-based global bus manufacturer Alexander Dennis Limited (ADL) on Thursday gave an update on its proposal last month to cut up to 650 jobs across the company’s UK facilities “in response to the significant fall in demand for new buses and coaches in the United Kingdom as a result of the coronavirus pandemic.”

Alexander Dennis said it intends to transfer chassis production to its Falkirk factory and this move “will impact around 200 employees in manufacturing and operational support roles at Guildford.”

ADL said the current lack of demand for new buses will also mean the potential loss of 90 production jobs in Scarborough and a net reduction of 160 manufacturing roles in Falkirk “even with chassis assembly transferred to that site.”

A further 200 roles “will be affected” in support functions across all UK sites. ADL is seeking voluntary redundancies to reduce the number of compulsory job losses.

In a statement, ADL said: “Alexander Dennis Limited, a subsidiary of NFI Group Inc, one of the world’s largest independent global bus manufacturers, today announced that it has begun the formal consultation on its previously announced restructuring programme in response to the significant fall in demand for new buses and coaches in the United Kingdom as a result of the coronavirus pandemic.

“The dramatic fall in demand for new buses and coaches as a result of lockdown, social distancing and low passenger numbers has left ADL with no alternative but to adjust its business to the current economic situation.

“Since the announcement on 27th July 2020 of a restructuring programme that puts up to 650 jobs at risk across all of the company’s UK facilities, ADL has continued its dialogue with the UK and Scottish Governments and other stakeholders.

“However, there remains no immediate visibility of the stimulus funding urgently required to support operators to place orders, making it necessary to begin the formal consultation on the proposed changes.

“ADL remains firmly committed to working with its customers and supporting the bus and coach operating industry, which is battling an unprecedented crisis.

“The restructuring programme is designed to adjust current capacity without compromising the company’s ability to respond to a resurgence of demand in the future.

“Following experience of vertical integration at ADL’s facilities in North America and the Asia Pacific region, where building chassis and body on the same site has demonstrated efficiencies in terms of output, time, cost and co-ordination, ADL intends to transfer chassis production to its Falkirk factory.

“This will impact around 200 employees in manufacturing and operational support roles at Guildford.

“Non-manufacturing functions including Engineering, Test & Development and Aftermarket will continue to be based at the Guildford site.”

ADL president & managing director Paul Davies said: “The Dennis brand is of huge significance to the company, with its proud history and heritage of automotive innovation dating back to its inception in 1895.

ADL added: “The current lack of demand for new buses and coaches will also mean the potential loss of 90 production jobs in Scarborough and a net reduction of 160 manufacturing roles in Falkirk, even with chassis assembly transferred to that site.

“As the company adjusts its overhead to the change in manufacturing activity, a further 200 roles will be affected in support functions across all UK sites.

Davies said: “We have no choice but to implement these tough decisions to protect the company’s future health.

“We remain confident that the situation will improve in time, and we are well placed to take advantage when that happens, but right now we have to adjust to our new economic reality.

“We continue to call upon the UK and Scottish Governments to urgently introduce meaningful support to facilitate demand for new buses and coaches, not only to prevent further damage to UK bus and coach manufacturing that could threaten additional production sites, but to help build back better with a green recovery that delivers cleaner air for our towns and cities.

“The installed UK fleet is currently approximately 50,000 buses and 21,000 coaches with an average age of nearly 11 years.

“Further, only 0.1% of the total fleet are electric, which provides opportunity for massive reduction of the environmental footprint.”

Unite the union’s assistant general secretary Steve Turner said: “While the coronavirus crisis has undoubtedly impacted ADL’s short term operations following a collapse in orders from UK bus operators, the firm’s Canadian parent company NFI has exposed the true extent of its betrayal of UK workers, their families and communities.

“Pre-Covid plans, identified by Unite following disclosure of information requests, are now being accelerated to use the pandemic as an excuse to bring forward the ending of production at Guildford and attack jobs across the group while outsourcing work abroad in order to line shareholder pockets.

“The fact that all this is being done after the company took full advantage of UK taxpayer’s money through the job retention scheme, and after our help has been sought to secure government funding for advanced manufacture of green buses, is a gross betrayal of a loyal, world class workforce.

“ADL and NFI’s disgraceful and deceptive actions are devastating for workers and communities across the UK.

“If ADL believe that Unite will not organise workers and communities to fight these cuts they are sorely mistaken.

“ADL’s workforce is rightly incandescent at the way they have been treated, they will not stand for it and their union will be shoulder to shoulder with them at every step of this fight.”

Unite national officer for automotive Steve Bush said: “These disgraceful cuts are an acceleration of the footprint reduction outlined in NFI’s pre-Covid strategy – a strategy that until this week was hidden from ADL’s UK workforce.

“The company has made no attempt at a proper consultation with Unite and has attempted to pass off these cuts as an inevitable result of the pandemic downturn.

“Unite has received no official confirmation of the job losses announced this morning and staff are still in the dark as to where many of the redundancies will fall.

“ADL and NFI’s actions are naked corporate vandalism driven by greed and will not go unchallenged by Unite.

“The union continues to call for the government to bring forward its order of 4,000 new low emission buses, but any public money including new orders, must now be conditional on the company retaining jobs and keeping work in the UK.”