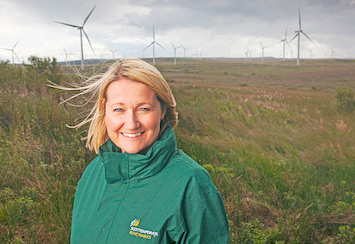 ScottishPower Renewables has announced a new pioneering strategic partnership that has been established to create new green hydrogen production facilities with clusters of refueling stations across Scotland.

The plan supports Scotland’s efforts to achieve net zero by 2045.

“Green Hydrogen for Scotland” is a partnership of ScottishPower Renewables, BOC – a Linde company, and ITM Power.

“Hydrogen fuel – which is particularly suitable for larger vehicles – is produced through a chemical process known as electrolysis, using an electrolyser to extract hydrogen from water,” said ScottishPower Renewables.

“Powering the electrolyser from renewable sources like wind and solar power means the process is completed without any carbon emissions – making the hydrogen ‘green’.

“The new facilities planned by ‘Green Hydrogen for Scotland’ will ensure zero emission fuel is readily available to organisations such as local authorities and others with fleets of heavy duty vehicles.”

The partnership’s first project is “Green Hydrogen for Glasgow” — designed to provide carbon-free transport and clean air for communities across the city, which wants to become the first net-zero city in the UK by 2030.

A proposed green hydrogen production facility located on the outskirts of the city will be operated by BOC, using wind and solar power produced by ScottishPower Renewables to operate a 10MW electrolyser, delivered by ITM Power.

The project aims to supply hydrogen to the commercial market within the next two years.

It also supports the Scottish Government’s decarbonisation targets and Glasgow City Council’s commitment to creating a zero emissions vehicle fleet, using only electric and hydrogen-powered vehicles by the end of 2029.

Lindsay McQuade, CEO of ScottishPower Renewables, said: “Making transport cleaner and greener is one of the key issues at the heart of how we can unlock net zero and achieve the ambitious climate change targets set out at both regional and national levels over the next 10-30 years.

“While electrification will play a significant role in taking petrol and diesel vehicles off our roads and make an important difference for the planet, it can only go so far, and we’re doing something about that.

“Our revolutionary approach – which really will be a game-changer – fully supports the large scale transformation needed to replace heavy diesel vehicles with cleaner, greener alternatives.

“By working with industry leaders ITM Power and BOC to bring our collective expertise together, we will maximise the potential of this new technology to offer fleet operators and industry a packaged solution that brings all of the pieces of the jigsaw together – production, distribution, supply.

“All they have to do is provide the vehicles. We have a huge opportunity here to bring net zero ever closer for the benefit of everyone and support a better future, quicker – and we will make it happen.”

Mark Griffin, Market Development Manager for Clean Fuels at BOC said: “Forward-thinking councils are putting green hydrogen at the centre of their transport strategies to help achieve their net-zero targets.

“We already operate Europe’s largest hydrogen production and refuelling site in Aberdeen and are looking forward to working with councils across Scotland to develop more projects in partnership with SPR and ITM Power.”

Graham Cooley, CEO of ITM Power, commented: ““This project provides the opportunity to fulfil Scotland’s rich potential for the simultaneous decarbonisation of power and transport fuel.

“ITM Power is proud to be participating in this project with our strategic partners.

“Green Hydrogen for Glasgow is an important step forward for the city’s net zero targets and enables Scotland to demonstrate that its most densely populated urban areas can fully utilise its abundant local renewable energy resources to decarbonise its transport system and industry.“