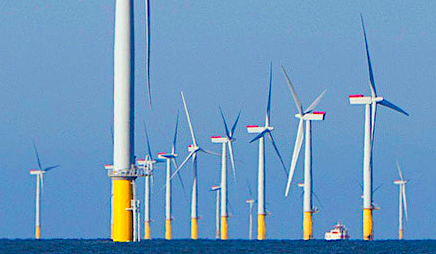 Perth-based energy giant SSE, Iberdrola’s ScottishPower and the UK’s National Grid have confirmed they are developing ambitious plans to deliver “an underwater super-highway that will see the North Sea become the hidden power house of Europe.”

SSE said the electric super-highway will play a vital role in achieving net zero as all three power firms were confirmed on Monday as major partners of the UN’s COP26 climate change event to be held in Glasgow in 2021.

The “Eastern Link” will be made up of some of the world’s longest subsea HVDC cables with a combined capacity of up to 4GW.

The investment is expected to support hundreds of green jobs throughout construction and operation.

The project will be led by SSE, ScottishPower and National Grid, setting off from two separate points in Scotland — Peterhead and Torness.

“The cables will significantly increase the UK’s capacity for clean, green renewable power, enabling enough electricity for around four million homes to travel up to 440km from the east of Scotland, a hub for offshore renewables, down to two points in the north-east of England, Selby and Hawthorn Point,” said SSE.

“The east coast of Scotland is already home to almost 1GW of operational offshore wind farms with a further 4.4GW in the pipeline and up to 10GW predicted following the outcome of the next Scottish offshore wind leasing round, Scotwind.

“Survey works along the route have recently commenced with construction works currently expected to take place from 2024.”

SSE CEO Alistair Phillips-Davies said: “The development of the East Coast link is one of the most exciting energy developments over recent decades and is essential to delivering the UK’s 40GW offshore wind target by 2030 and critical to our own commitment to build a network for net zero emissions.

“With the eyes on the UK ahead of COP26 next year, this project clearly demonstrates how the UK is leading the world in tackling the climate emergency and supporting thousands of jobs and supply chain opportunities.”

ScottishPower CEO Keith Anderson said: “COP26 will provide the perfect opportunity for the UK to showcase its innovation, progress and leadership in tackling climate change and we are proud to be major partners in the event.

“We firmly believe the UK can achieve its ambitious Net Zero targets but it must be done through investment and innovation in essential projects like the Eastern Link, providing benefits for customers and society in the long term.

“COP’s success is, in part, thanks to the collaboration of sectors, industries and countries and we are looking forward to exploring this mammoth opportunity with SSE and National Grid.”

Nicola Shaw, UK Executive Director at National Grid, says: “This project will help transport enough renewable electricity for around 4.5 million homes across the UK and will become part of the backbone of the UK’s energy system.

“It’s a great example of companies working together on impressive engineering feats that will help the country hit its net zero carbon target by 2050.”