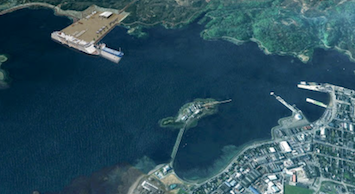 The Scottish Government announced on Wednesday that more than 200 jobs will be created through the development of a new deep water terminal at Stornoway in the Outer Hebrides.

Initial work will begin on the Stornoway Deep Water Terminal with Rural Economy Secretary Fergus Ewing confirming £49 million investment from a number of partners “to strengthen transport links and support a range of diverse industries” in the Western Isles.

“The project includes a facility forberthing for cruise ships up to 360 metres long, a new deep water berth to cater for larger cargo vessels, and a freight ferry berth; berthing and unloading facilities for renewable energy components and development land for a range of uses such as industrial processes and decommissioning,” said the Scottish Government.

Ewing said: “We want our Island communities to thrive and this investment to create a deep water terminal at Stornoway will provide infrastructure to support a range of diverse industries and economic activities, ranging from cruises, to energy, to aquaculture and ferries, which will be a tremendous benefit to the Western Isles.

“This transformational project, which will put Stornoway in pole position to take advantage of emerging technologies such as hydrogen,  is the culmination of dedicated partnership working between local partners, Highlands and Islands Enterprise (HIE), Comhairle nan Eilean Siar and the Scottish Government to create a development of real value to communities.

“This is a great example of the blue economy in action, as it is creating infrastructure in our islands which can benefit a range of marine industries and coastal communities, helping Scotland build back better from the pandemic and make the transition to net zero through the creation of a stronger, more resilient, sustainable economy.”

Comhairle nan Eilean Siar leader, councillor Roddie Mackay, said:  “This investment is the first step in a comprehensive vision for the redevelopment of Stornoway  and the ancillary facilities around the Port.

“The project will create new marine-related opportunities, not only for Stornoway, but the whole of the Outer Hebrides.

“We believe this investment will make Stornoway one of the premier ports in the west of Scotland and will create significant new economic value for the overall Scottish economy.

“Our ambition is that the Deep Water Terminal will be a driver and catalyst for a series of new activities such as the creation of a hydrogen-driven energy hub and as a future base for renewable energy deployments west of the Hebrides.

“The Comhairle’s significant investment to Stornoway Port Authority will not only secure the present development project but will also facilitate a route to further value-added development opportunity.”

HIE chair Alistair Dodds said: “We have worked closely with SPA to support their masterplan, which we believe will bring about transformational change for the Outer Hebrides.

“The benefits of this development will be far reaching.

“It will strengthen transport links between the islands and the mainland.

“It will significantly enhance the islands’ potential in terms of the developing marine economy, which includes renewable energy, oil and gas decommissioning and tourism, and it will create many valuable local jobs.

“This in turn will help attract more people and business to the islands, stimulate wider economic activity and strengthen community resilience.

“We very much welcome these plans by the Stornoway Port Authority and look forward to continuing to work with them as they implement the masterplan.”

“We believe it will bring massive new revenue streams to the Port, create new employment in the area for decades to come, and go a long way to helping Scotland reach its net zero carbon emissions target by 2045.

“This investment is the culmination of years of work on this project and we could not have done it without the backing of the Scottish Government, Highlands and Islands Enterprise, Comhairle nan Eilean Siar, Crown Estate Scotland and the Stornoway Trust.

“I would like to thank everyone on behalf of Stornoway Port Authority for their hard work and commitment to the project.”