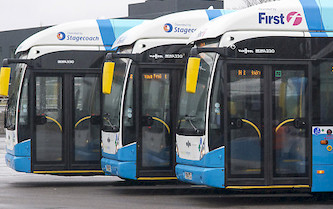 The Scottish Government said on Monday the hydrogen sector will receive £100 million over the next five years “to support a green recovery and Scotland’s just transition to net zero.”

It said Scotland is set to become a leading hydrogen nation with an ambition to generate 5GW of renewable and low-carbon hydrogen by 2030 – enough to power the equivalent of 1.8 million homes.

It said economic impact research suggests the industry has the potential to be worth up to £25 billion a year to the Scottish economy by 2045.

Hydrogen – which emits no carbon dioxide – can be used as an alternative to natural gas to transfer and store energy and could replace fossil fuels in industrial processes, internal combustion engines and homes.

£100 million of the £180 million Emerging Energy Technologies Fund announced as part of the Scottish Government’s Climate Change update will be invested in the hydrogen sector.

Scotland’s Energy Minister Paul Wheelhouse said: “We are the first country in the UK to publish a Hydrogen Policy Statement that sets out how we can make the most of Scotland’s massive potential in this new sector.

“Hydrogen is rapidly emerging across the international community as a sustainable solution for the decarbonisation of the economy and a key element of the energy transition picture.

“Scotland is prepared to play its full part together with other European nations – that’s why we’re publishing this key policy statement today and investing £100 million of Scottish Government resources to stimulate the sector and its supply chain.

“Scotland has, in abundance, all the raw ingredients necessary for the production of low-cost hydrogen as well as one of the largest concentrations of offshore engineering expertise in the world that can harness Scotland’s renewable energy potential in technologies like wind, wave and tidal power, to produce green hydrogen.

“Indeed, Scotland is one of the best placed nations anywhere in the world to develop competitively priced hydrogen for our own economy’s needs and to generate a surplus in supply to export to other European nations with emerging demand, but insufficient supply to meet their own needs.

“No one fuel or technology is, by itself, the solution to climate change, but hydrogen has the potential to be a very important part of a progressive, decarbonised energy system supporting our transition to net zero in transport, heating and industrial decarbonisation.

“We are committed to supporting this emerging sector to deliver a transformation in how we produce, store and utilise energy and to maximising the economic benefits that the production of hydrogen can bring.”

Chief Executive of the Scottish Hydrogen and Fuel Cell Association Nigel Holmes said: “We welcome this Hydrogen Policy statement which underlines the opportunity for Scotland to be the leading hydrogen nation, and puts us on the right path to deliver net zero by 2045.

“This ambition builds on the experience and lessons learned with projects in Aberdeen, Fife, Orkney, and the Western Isles.

“Islands and ports will be hubs for energy innovation, bringing together large scale renewables for green hydrogen production.

“The identified capacity of 25GW of electrolysis by 2045 will produce 126TWh per year of green hydrogen across Scotland, with 32TWh to deliver Scotland’s net zero target and 94TWh of green hydrogen for export.”