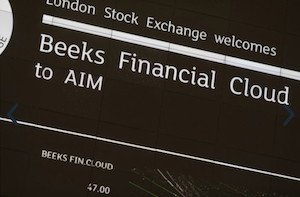 Glasgow-based Beeks Financial Cloud Group, a connectivity provider for financial markets trading, said late on Tuesday it intends to conduct a fundraising to raise gross proceeds of up to £5 million through a placing to new and existing institutional investors of new ordinary shares.

“In the event of suitable oversubscriptions, the company has been notified by Gordon McArthur, chief executive officer of the company, that he would sell up to approximately £2 million worth of existing ordinary shares …” said Beeks.

“Gordon McArthur is currently interested in 27,475,193 ordinary shares, representing approximately 53.14 per cent. of the current issued share capital of the company.

“The placing will be conducted through an accelerated bookbuild which will be launched immediately following this announcement.

“The price at which the placing shares are to be placed and the number of new ordinary shares and sale shares will be determined at the close of the bookbuild.

“A further announcement confirming the closing of the bookbuild, the placing price and the number of placing shares to be issued or sold pursuant to the placing is expected to be made in due course.

“The placing is not being underwritten.

“Completion of the placing is conditional, inter alia, upon the placing agreement not having been terminated and becoming unconditional and the passing of the resolutions by shareholders to authorise the issue of the new ordinary shares at the general meeting expected to be held at 11:00a.m. on 23 April 2021.”