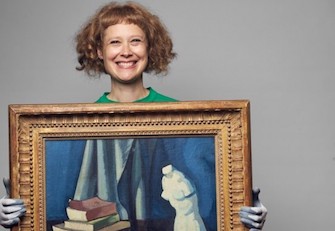 Alice Strang of the National Galleries of Scotland (NGS) is leaving to join auctioneers Lyon & Turnbull as a senior specialist in modern and contemporary art as the auction house prepares for two major sales of Scottish art.

Strang won a Saltire Society “Outstanding Woman of Scotland” award for her curatorial leadership of the landmark “Modern Scottish Women: Sculptors and Painters 1885-1965” exhibition in 2015.

At the National Galleries of Scotland she curated a series of high-profile retrospectives of three of the Scottish Colourists — S.J. Peploe, J.D. Fergusson and F.C.B. Cadell.

“Her reputation goes before her and she joins us during an exciting period of expansion for the company in her particular sphere of knowledge.

“This autumn, we have two significant events with which Alice will be closely involved; our sale of the private collection of St Ives School artist Wilhelmina Barns-Graham and our Scottish Paintings & Sculpture auction in December, which will include a section celebrating the 150th anniversary of the birth of the Scottish Colourist, S.J. Peploe.

“Alice will also play a role in our highly successful Modern Made: Modern British & Post-War Art, Design & Studio Ceramics sales, which are held in London.”

Strang said: “After many happy years at the National Galleries of Scotland, I’m delighted to be returning to my auction house roots.

“I’m excited to be embarking on a new adventure while still being immersed in the world of Modern British Art.

“The Wilhelmina Barns-Graham collection sale is particularly close to my heart, having served two terms as a trustee of the charity she set up to support her legacy and others within the visual arts.

“Its proceeds will provide a major boost to the Trust’s wide-ranging grants programme.

“S.J. Peploe is another artist with whom I have a close affinity, having curated a major retrospective of his work – and edited a book to accompany it – as part of the National Galleries of Scotland’s Scottish Colourist series of exhibitions.”