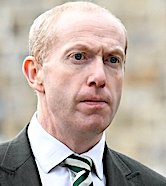 Celtic Football Club has confirmed the appointment of Michael Nicholson as chief executive with immediate effect.

Chris McKay, the club’s finance director and member of the board, will assume the role of chief financial officer, with a broader range of executive responsibilities.

Nicholson has held the position of acting chief executive since early September when Dom McKay stood down “for personal reasons” after just 10 weeks in the job.

Nicholson was formerly Celtic’s director of legal and football affairs and has been with the club since 2013.

“Following a successful career in sports law, Michael (45) joined Celtic in 2013 as company secretary and head of legal,” said Celtic.

“He was promoted to director of legal and football affairs in 2019.

“Michael has been a key member of the club’s executive team working directly with the board, the chief executive and the football manager.”

Nicholson said: “As a Celtic supporter all my life, I will do everything I can to drive the club forward, working at all times in the best interests of Celtic.

“I have been fortunate to be part of this great institution for a number of years and it is a privilege to now hold this new responsibility.

“We have a team of brilliant people who are absolutely committed to Celtic and we will work together to deliver success for the club and our supporters.

“I look forward to working with Ange, the board, our colleagues and supporters in order to advance as a club, proud of our traditions and dedicated to constant improvement.

“The current environment remains uncertain and everyone at the club recognises and sincerely appreciates the ongoing commitment of our supporters.

“Our League Cup victory at the weekend gives us all something to celebrate and we look forward to continuing success for Celtic Football Club.”

Celtic chairman Ian Bankier said: “We are delighted to confirm this appointment.

“Michael is well known and highly respected across football domestically and internationally.

“He has the ability and experience to take Celtic forward positively and achieve great results.

“The appointments of Michael and Chris bring important continuity.

“They have been close to Ange since his arrival as football manager in the summer and since then they have supported him brilliantly and will continue to do so as we further develop our football operations.”