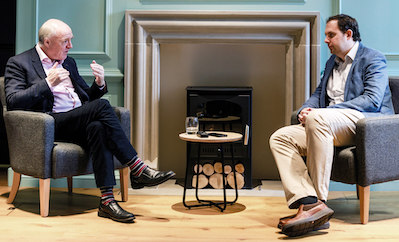 Two managers of Baillie Gifford’s flagship fund, the £17 billion Scottish Mortgage Investment Trust plc, have said the Edinburgh investment firm is in the business of “backing and identifying individuals to follow” rather than investing in “companies.”

As James Anderson steps down as joint manager of Scottish Mortgage, he shared his opinions in a discussion with colleague Lawrence Burns, who joined Scottish Mortgage as deputy manager last year.

Baillie Gifford had around £277 billion of assets under management and advice as at April 1, 2022 — down from around £360 billion in November 2021 — as some of the firm’s high-flying funds of the last few years came back down to earth in the first quarter of 2022.

The discussion is published in a Baillie Gifford investment trust publication.

In the discussion, Anderson asked Burns: “Isn’t it really our experience, Lawrence, that rather than helping companies, it’s mostly about backing and identifying individuals to follow?

“Don’t we, therefore, need to help these people invent the companies, rather than investing in their company once it’s already in existence?

“Isn’t enabling deeply talented individuals and cultures what we’re trying to do?”

Burns replied: “Some are surprisingly dismissive of the role of individuals, perhaps out of wariness of the ‘hero narrative’.

“But from our experience, individuals have been absolutely and utterly crucial.

“Even though it existed before Elon Musk, it’s hard to argue that Tesla would have existed in the way that it does now or that the auto industry wouldn’t be 10 years behind where it is now if it wasn’t for that one individual.

“Sometimes it can be one or two people from an organisation, but it tends to be one.”

Burns replied: “Yes. With companies, you need to go against the status quo. And doing that can be both physically and emotionally exhausting.

“Which prompts me to ask: James, how difficult was it for you? I’m assuming there have been some quite hard battles.

“I’m interested in where you got the conviction necessary to fight those battles because you’ve always been humble and never claimed 100 per cent conviction in anything.

“Yet we sometimes need to fight quite hard without it being possible to know for sure the direction we are pushing is the right one.”

Anderson agreed: “That is a fair account of how it has been from my perspective, but it’s crucial to find ways to make evolving easier in the future.

“I suppose I felt that, if given a reasonably long period, the odds were being shifted sufficiently in our favour.

“But we did enjoy a profound stroke of luck in that most of what we were doing began to work fairly soon, and it became easier as evidence emerged that our approach was working.

“I feel extremely strongly that what we need most of all is the ability to move on, and that we have to be ourselves.

“We have to learn and adapt …”

Burns added: “We’ve talked over the last year or so about the impact that companies have on society.

“It strikes me that if you look at the biggest holdings in the Scottish Mortgage portfolio, the societal impact of companies such as Moderna, Tesla, Illumina, ASML and Ginkgo Bioworks has been profound.

“This is different from what has been usual over the last 20 years.

“Is it because the nature of the companies that we’re choosing to own is a bit different? It feels there’s more correlation in terms of our holdings than in the past.

Anderson replied: “It’s more a reflection of the fact that the revolutions that are happening in the world are moving into areas where these companies have that deeper impact.

“Were there similar opportunities available 20 years ago?

“Yes, of course. But I think the broad scale of societal impact in the portfolio now is something to be revelled in.

“Impact in a societal sense is just as much, if not more, concentrated in a small number of companies.

“We should be inordinately pleased that we can claim such a beneficial impact.

“We should be shouting that from the rooftops rather than obsessing over detailed sums, which are anyway often misleading.

“The margins of error on calculation and on our level of understanding of whether a company is societally good or bad are so great that with the vast majority of companies I don’t think we can ever have confidence as to whether we’re helping or not helping.”