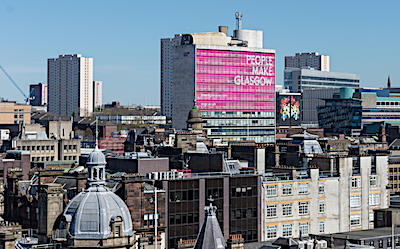 A £30 million transformation programme has been unveiled by Bruntwood SciTech after it acquired Glasgow’s Met Tower — the old City of Glasgow College building — from Osborne+Co for £16.2 million, marking its first investment in Scotland.

The 14-storey office building in the heart of Glasgow’s city centre and innovation district – that has been vacant since 2014 – is set to become a new hub for tech and digital businesses.

Bruntwood SciTech, a joint venture between investor and developer Bruntwood and Legal & General, is a property and innovation services provider dedicated to driving the growth of the science and technology sector.

Its plans for the Grade B listed Met Tower in Glasgow will transform it into a hub where university spinouts, startups, scaleups, and large leading tech businesses can co-locate together and benefit from being in a collaborative tech cluster.

It is intended that Met Tower be net zero in operation following a transformation project that will retain as much of its existing fabric as possible, significantly reducing the embedded carbon impact of the re-development.

Businesses based at Met Tower will be able to access Bruntwood SciTech’s UK-wide network of innovation districts, allowing them to collaborate with a 500-strong specialist community of tech and science businesses, and will be provided with their specialist Innovation Services support which includes access to highly skilled STEM talent, new markets, funding and finance support and professional services advice.

Offering 113,000 sq ft of coworking, serviced and leased office space, Bruntwood SciTech will also be creating a shared breakout space on the ground floor, showers, lockers, secure cycle store and sports kit drying room, as well as a rooftop lounge to be used by its future community.

Work is expected to start later this year, subject to planning, and complete in 2024.

“Met Tower is in a brilliant location for these types of businesses and is perfectly placed to help create a hub in which they can scale, co-innovate and thrive.

“Glasgow’s science and tech sector is rapidly growing, having seen some of the highest growth in the whole of the UK in the past two years, and now makes up 28% of all jobs in the city.

“As a result it has retained its position in the top three leading tech cities in the UK outside of London.

“Our investment in Glasgow is for the long term, and as we’ve demonstrated in our other cities, we are committed to becoming embedded and driving forwards the growth of the knowledge economy and economic impact of the sector both in Glasgow and other parts of Scotland.

“This is our first in hopefully several brilliant projects in the country.”

As the Met Tower project develops, Bruntwood SciTech will be looking to recruit a team in Glasgow.

OakNorth Bank has supported Bruntwood SciTech with the acquisition of Met Tower through the provision of an £8.6 million acquisition loan and an agreement to provide up to £27 million of additional funding to support the subsequent redevelopment of the building.