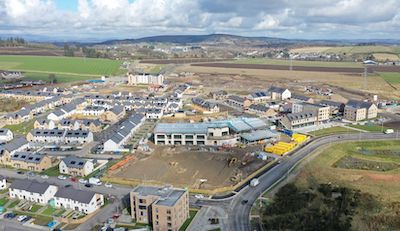 Shepherd Chartered Surveyors announced it has been appointed by the joint administrators of Countesswells Development Limited (CDL) to market a massive 3,100-home development site west of Aberdeen formerly owned by CDL, a subsidiary of Stewart Milne Group, which went into administration at the end of last year.

About 725 homes have already been built at Countesswells by Stewart Milne, Barratt, David Wilson Homes, Kirkwood and CHAP Homes.

Shepherd said it has been appointed to dispose of 78 acres of net developable land in a range of land parcels for both residential and commercial usage.

“The scheme comprises a significant new settlement to the immediate west of Aberdeen city centre, a strategic location with good access to the city centre, Westhill and Kingswells,” said Shepherd.

“The site gives quick access to the local and national road networks with easy access to the Aberdeen Western Peripheral Route (AWPR), which again assists in accessibility.

“The development is one of the largest seen in the area for many years and is envisaged to provide in excess of 3,100 houses being a mix of mainstream and affordable housing in a range of two, three, four, five and six bedroomed houses and flats.

“There will also be areas of commercial and employment land within the development.

“The construction of one primary school by Aberdeen City Council is well under way and on completion of the scheme there will be a second primary school and a secondary school.

“In the heart of the settlement are various retail areas, including a neighbourhood shopping centre which is anchored by a 4,000 sq.ft. Sainsbury’s.”

Aberdeen-based Shepherd managing partner Chris Grinyer said: “We are delighted to secure this major instruction to market this substantial prime development site due to our acknowledged established presence and performance in this competitive market sector.

“The local market is showing real signs of improvement, reflecting increased economic activity in the area, and we anticipate that this will result in good interest being generated in Countesswells.”

Tom MacLennan of FRP Advisory, joint administrator of CDL, added: “Following on from securing the development site, we are now in a position to bring this unique development to the market.

“This is an opportunity for developers to acquire a substantial prime development in Aberdeen and progress it to a conclusion.”