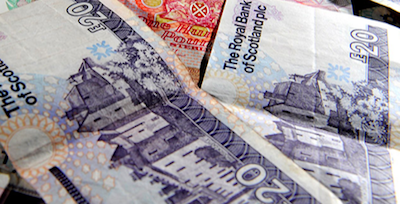 The Scottish Government’s Resource Spending Review on May 31 will have to “either take the axe to certain areas of spending, signal higher levels of taxation – or ignore the issue for now, hoping for extra funding or borrowing powers from the UK government.”

That’s according to a new report from the Institute for Fiscal Studies (IFS) , a London think tank.

The Resource Spending Review will set out the Scottish Government’ plans for day-to-day spending on devolved public services for the next four years.

The IFS report said the review “will have been no easy task.”

It said: “Expensive policy commitments and relatively slow forecast growth in income tax receipts, not to mention the recent increase in inflation, mean that it is unlikely that revenues will keep pace with spending pressures.

“The Scottish Government will therefore have to either take the axe to certain areas of spending, signal higher levels of taxation – or ignore the issue for now, hoping for extra funding or borrowing powers from the UK government.”

The report added: “The Scottish Government could also choose to set spending plans that exceed expected funding under current policy in the hope that the UK government either boosts its funding or gives it enhanced borrowing powers.

“Some additional funding and borrowing powers may be forthcoming but unlikely on the scale required to close up the funding gap faced by the Scottish Government.

“On borrowing, there have been growing calls to enhance the borrowing powers of the devolved governments, most recently from the Northern Irish Fiscal Commission.

“Even if the UK government heeds these calls, the figures discussed (for example, an additional, 1% of day-to-day spending) would only address part of the shortfall, and only temporarily as borrowing has to be repaid eventually.”

It said even prior to the recent surge in inflation, the combination of underlying spending pressures, income tax revenue shortfalls, and expensive policy commitments, implied that the Scottish Government faced a funding gap over the next few years.

“Indeed, it projected a gap of £3.5 billion in 2026-27 under its middle scenario: a sizeable amount equivalent to 8% of its projected budget for day-to-day spending in that year, or £640 for every person in Scotland,” said the IFS.

“Underlying this figure of £3.5 billion is a series of assumptions, all of which are uncertain.

“The Scottish Government recognises this uncertainty by producing high and low scenarios for both funding and spending pressures, although the resulting range of projections (from a £10 billion shortfall to a £4 billion surplus) almost certainly overstates the degree of uncertainty.

“Focusing on the Scottish Government’s middle scenario, one factor that would likely lead it to overstate the pressures it faces is the baseline it has chosen to project future spending pressures from.

“In particular, it has chosen to project forward spending in 2022-23, and applies its long-term assumptions about growth in demands and costs from that year onwards.

“However, part of the spending in 2022-23 is related to the ongoing impacts of the COVID-19 pandemic, most notably on the NHS and the cost of running public transport networks.

“At least some of these costs should abate over the next five years as pandemic-related pressures recede and passenger numbers recover.

“On the other hand, the Scottish Government likely underestimates the pressures arising from underlying health spending pressures.

“Drawing on the Scottish Government’s Health and Social Care Medium Term Financial Framework, its middle scenario assumes that health expenditure would need to grow by around 3.5% per year in cash-terms.

“Given the current rate of inflation, growth in demand for healthcare services, and the challenges of boosting productivity in a labour-intensive service, this is low.

“For context, the English Department of Health and Social Care saw an annual average cash-terms increase of 3.7% a year between 2009-10 and 2019-20 – a decade which saw the slowest growth on record in NHS funding and worsening waiting times.

“Another area where it would initially appear that pressures may be underestimated is public sector pay.

“The Scottish Government’s middle scenario includes an assumption of 2% annual pay awards, which would now entail large real-terms pay cuts for public sector workers in Scotland, which may not be sustainable.

“It is not clear why this was done, but it means that in reality its middle scenario is actually consistent with pay rises of closer to 3 – 4%. But even these would leave public sector workers facing a real-terms pay cut in the coming year.

“Finally, on the revenue side of the budget, the Scottish Government’s projections exclude revenue from and spending funded by business rates.

“These revenues are expected to increase as temporary pandemic-related reliefs end, which would help reduce the funding gap identified.”