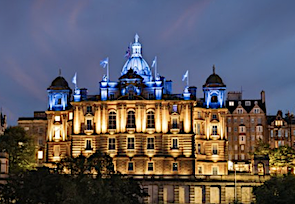 Scotland’s First Minister Nicola Sturgeon said on Friday the Scottish Government will publish a new paper next week setting out its plans for the creation of a Scottish central bank and Scottish currency in an independent Scotland.

In interviews ahead of the SNP conference Sturgeon told BBC Radio Scotland the paper will be released just days after the conference and after arguments are made at the Supreme Court that might the Scottish Government to legislate for a second independence referendum.

Sturgeon said work on a Scottish central bank would begin immediately after a Yes vote, with an an independent Scotland retaining the UK pound for “some time.”

Sturgeon told the BBC’s Good Morning Scotland programme: “In terms of setting up a central bank, we would start that process as soon as Scotland voted for independence.

“That central bank would be the provider of advice to the Scottish Government on these matters, it would be the lender of last resort for our financial services industry, it would require reserves that could cover these limited functions in that first period.

Questioned on the timescale for Scotland to move to a Scottish currency, Sturgeon said there would be key metrics that would have to be hit before the change.

“It’s important that it’s guided by principles rather than fixed timescales,” she said.

Sturgeon said the economic issues faced by the UK government in the last few weeks highlighted the need for “responsibility” and “good planning”.

“That underlines the importance of us, as we plan for independence, being careful, being responsible and understanding the detail of what we’re seeking to do.”

The announcements on the central bank and currency came as the Scottish Government’s top law officer prepares to appear before the Supreme Court in a case that may allow Holyrood to legislate for an independence referendum.

The Lord Advocate referred prospective independence referendum legislation to the court in the summer, asking judges to decide if it is within the powers of Holyrood.

Oral arguments will take place on Tuesday and Wednesday next week, although there is no date for an announcement of the court’s judgment.

On the question if there will be enough time to legislate to hold a referendum on the announced date of October 23 next year, Sturgeon said she believes there will be.