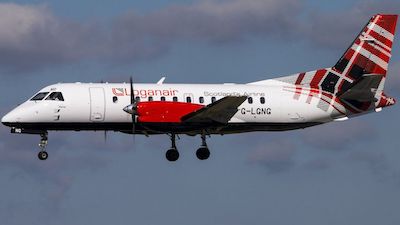 Glasgow-based Loganair — currently up for sale — announced that it returned to profitability in the financial year to March 31, 2022, as it reported a profit before tax of £4.98 million on a turnover of £161 million.

The return to profit followed losses in each of the previous two years as the effects of the Covid-19 pandemic struck the airline industry.

During the year, Loganair said it became the UK’s third busiest airline behind British Airways and easyJet when measured by the number of flights operated.

The airline carried more than 910,000 passengers and in 2022, experienced its busiest summer to date.

Loganair stressed the important role that its charter and contract operations have played in its return to profitability.

It has expanded its contract work in support of the energy industry at Aberdeen and now counts several major football and Rugby SuperLeague teams amongst its client base for bespoke aircraft charter services.

Loganair CEO Jonathan Hinkles said: “The efforts of every member of Loganair’s team throughout the pandemic, and the diversified nature of our business, have enabled the airline to return to profitability far sooner than many of our UK airline industry peers.

“It has, without doubt, been an incredibly tough two years. Even so, our trading results, strengthening balance sheet, and our comprehensive GreenSkies environment programme means that we are wholly confident that Loganair is now in the strongest position of any UK regional airline to weather incoming storms affecting the wider economy …

“Together with the unstinting support of our staff and our owners, our relationship with Clydesdale Bank / Virgin Money has played an essential part in Loganair’s longevity and prosperity, never more so than during the Covid-19 pandemic.

“We’re delighted that this long-standing arrangement is set to continue.”