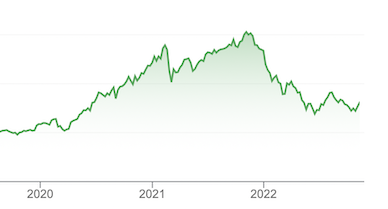 The half-year report from the £14 billion Scottish Mortgage Investment Trust plc is another sobering read from the giant closed-end fund which has been routed over the past year amid the global sell off in its beloved “growth” and technology stocks.

Scottish Mortgage’s share price is down about 46% for the past 12 months, but the fund still has a stock market value of almost £12 billion, making it the second-biggest plc run from Scotland after SSE.

For the six months to September 30, 2022, Baillie Gifford’s widely-held flagship fund reported its net asset value per share with debt at fair value (NAV) fell 15% compared to a 7% decrease in the FTSE All-World index.

Scottish Mortgage reported a loss of £2.57 billion on “net return on ordinary activities before taxation” for the period compared to a profit of £2.67 billion a year prior.

The formerly high-flying Scottish Mortgage saw its share price almost triple during 2020 and 2021 from around £5.80 to over £15, but the stock fell to as low as £6.93 in May this year amid the global sell-off.

The fund’s share price has since risen to around £8.15, recovering at least some some of its lost ground.

Small comfort, perhaps, for the more careful of the army of investors in Baillie Gifford’s funds.

Those investors made a lot of money for years with Scottish Mortgage, but some of them may now feel they need to take a brave pill to persevere with the fund.

They will be reassured by the fact that over 10 years, Scottish Mortgage’s net asset value has increased by 528% versus a 208% increase in the FTSE All-World index. Over five years, it has increased by 115% against 53%.

“These include society’s transition away from carbon-fuelled transport and energy generation and the application of information technology to our understanding of the molecular basis of disease.

“While rising interest rates and increasing friction between the United States and China create a problematic environment to navigate, the long-term advantages of companies are often built in periods of stress and capital shortage.”

However, the fund did reduce its holdings in several Chinese firms, including long-standing investments in Alibaba and Tencent, citing that country’s “challenging” regulatory environment.

Bain wrote: ” … we are concerned that ongoing uncertainty will harm the risk-tolerant culture that has driven the long-term success of China’s private sector.”

The investment trust is now managed by Tom Slater and Lawrence Burns following the departure of James Anderson to Swedish investment company Kinnevik AB. Who would bet against Slater and Burns returning the fund to its glory days?

It won’t be easy.

Bain said the fund now “must evaluate the ongoing position of our holdings, unpicking the growth engines of recent years and verifying that they’re still functioning.”

At the same time, she said: “… we are redoubling our efforts to find new investments that can adapt to difficult economic conditions and position themselves to do well in the future.”

On the current investments of the fund, Bain said Moderna “continues to make progress in its infectious disease portfolio” with the bivalent booster for Covid one practical example.

“Our contention has always been that Moderna’s technology would have applications well beyond Covid, and commercial partners are now committing serious capital to such developments.”

On Tesla, Bain wrote that ” … despite the economic headwinds, Tesla has been able to sell every car it can manufacture and continues to scale up its production capabilities rapidly.”

She said Tesla’s Model Y SUV is the crucial volume driver over the next few years, with production ramping in Berlin and Texas, but added that scaling the battery cells supply chain “remains the most significant constraint.”

Bain confirmed further investment by the fund into Northvolt during the period.

“This private European battery producer is looking increasingly well-placed to supply the rapidly growing demand for electric vehicles,” she wrote.

“Swiss company Climeworks is developing a technology for capturing carbon directly from the air, which is likely to be necessary given the finite capacity for re-forestation.

“Its challenge is to scale up its impact.

“Upside Foods is seeking to produce animal protein in bioreactors which will allow for meat production without the carbon emissions from rearing and slaughtering animals. It is working with regulators towards product launches.”

“The trust was founded to provide capital to businesses with big opportunities but restricted access to funding following the market panic of 1907.

“It is important at times of stress to remember this founding story: corporate potential has little to do with the cycles of greed and fear in stock markets.

“Long-term growth investing is crucial for driving society forward. After a long period of global expansion, it’s easy to slip into the mindset that investors passively benefit from broader progress and economic growth.

“We believe causality flows in the other direction: long-term investment enables growth and progress. Technology and new ways of doing things aren’t adopted simply because their time has come.

“They happen because investors give entrepreneurs the financing and time to build their visions into reality.

“Without investment in technology, infrastructure and entrepreneurship, it will be tough to dig ourselves out of our current malaise.

“If so little of aggregate savings are directed into ventures exploring new technologies and approaches, what does it imply for the future?

“We risk condemning ourselves to the environment of anaemic growth and stagnant wages that has characterised the United Kingdom over the past decade.

“Financing the development of long-term growth companies is not what interests most investors. To understand that, you need only observe the commentary of recent months, focused on ‘risk off’, deleveraging and the flight to safety.

“The market’s focus has narrowed to a handful of economic variables. Stock prices react dramatically to each monthly update.

“This environment is off-putting, but it is not relevant to our investment decision-making. Instead, we must evaluate the ongoing position of our holdings, unpicking the growth engines of recent years and verifying that they’re still functioning.

“At the same time, we are redoubling our efforts to find new investments that can adapt to difficult economic conditions and position themselves to do well in the future.”