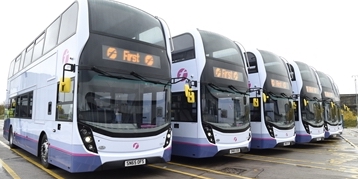 Aberdeen-based transport giant FirstGroup plc announced it has completed the sale of all but two of its remaining Greyhound US properties to an affiliate of Twenty Lake Holdings LLC for the net proceeds of £122 million, as announced on September 20, 2022.

FirstGroup also said it is launching a share buyback programme to purchase up to £75 million of ordinary shares starting on December 19.

FirstGroup is UK’s largest rail operator, with Government-contracted operations in Avanti, GWR, SWR and TPE, and is the second largest regional bus operator in the UK, operating in major urban areas including Glasgow, Bristol and Leeds.

“The group’s legacy Greyhound assets and liabilities are expected to generate c.£8m in net cash in FY 2024 and beyond, with c.£140m realised in FY 2023 after foreign exchange hedging costs,” said FirstGroup in a stock exchange statement.

“The board has considered the use of the Greyhound property proceeds as part of the group’s balanced capital allocation policy, including its commitments to decarbonise the First Bus fleet, maintain its progressive dividend policy and to review targeted investment in strategically and financially accretive growth opportunities related to its UK regional bus operations.

“Accordingly, following the receipt of the Greyhound proceeds and in light of the group’s cash generative operations and strong net cash financial position, the group is launching a share buyback programme to purchase up to £75m of ordinary shares of 5p, in line with the group’s existing authority granted by shareholders, which will commence on 19 December.

FirstGroup CEO Graham Sutherland said: “FirstGroup is in a strong financial position, with a balanced capital allocation policy and a clear strategy.

“We are well-placed to play a key role in the decarbonisation of public transport, make targeted investments in adjacent UK growth opportunities and to deliver value to our shareholders, including through the share buyback programme we have announced today.”