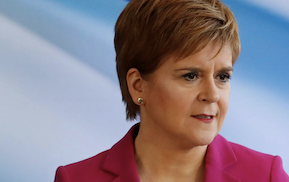 The Scottish National Party (SNP) has confirmed it would seek “a progressive alliance” with the Labour Party if the UK general election next month results in no party winning an overall majority.

In Scotland, the SNP has 35 out of 59 Westminster MPs, with some analysts predicting the party will make further gains — putting the SNP in a strong bargaining position.

“If there’s a hung parliament … SNP MPs will seek to form a progressive alliance to lock the Tories out of government,” Sturgeon said as the SNP launched its election campaign.

“The SNP is not going to be giving support to parties that do not recognise the central principle of the right of the people of Scotland to choose their own future.”

Sturgeon added: “Scotland’s vote to remain in the EU has been ignored.

“The Conservative Party has ridden roughshod over the Scottish Parliament.

“For the first time ever the UK government has chosen to legislate on devolved matters without the consent of Holyrood.

“With so-called ‘moderate’ Conservatives in full retreat and the hard-line Brexit ultras on the march, that is surely only a taste of what is to come.”