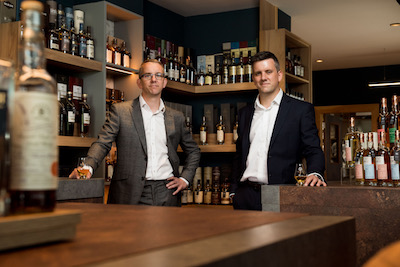 The multi million pound deal will deliver a 2.6X return to retail investors who participated in Whisky Hammer’s crowdfunding campaign two years ago.

Whisky Hammer was started in 2016 by brothers Daniel and Craig Milne who are originally from Macduff.

Platinum Whisky Investment Fund launched in 2014, raised $12 million, and is in the final stage of its wind down, exiting at over $24 million after seven years.

Whisky Hammer auctions sell more than £1 million under the hammer each month.

Whisky Hammer relocated in 2019 to a new, purpose-built facility near Udny, Aberdeenshire.

Daniel Milne, managing director of Whisky Hammer and Still Spirit, said: “This is a very exciting time for our business.

“The transaction signifies an important bond with our new Asian partner that will rapidly bring the group to the next phase of growth, and we are incredibly excited about what lies ahead.

“In addition, we are delighted to have generated a substantial return for our crowdfunding investors that helped us build the business to where it is today.”

Rickesh Kishnani, co-founder of Rare Whisky Holdings, said: “Our investment group is proud to join the Milne family business and help with their expansion to Asia, where the demand for whisky continues to grow at a rapid pace.

“We are also excited to use this new partnership to provide Whisky Hammer and Still Spirit members with exclusive access to our collection of aged casks.”