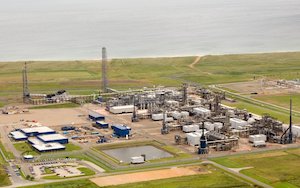 UK insurer and asset manager M&G said it has invested in two private companies at the forefront of carbon capture and storage technology — including the lead developer of the Acorn Carbon Capture and Storage and Hydrogen Project near Peterhead in north east Scotland.

“The two investments are made through the £143 billion Prudential With-Profits Fund on behalf of over five million policyholders and is in line with M&G’s ambition to achieve net zero carbon emissions across its entire investment portfolio by 2050 at latest,” said M&G.

“It is the lead developer of the Acorn Carbon Capture and Storage and Hydrogen Project (Project Acorn) in North East Scotland.

“Project Acorn will capture carbon dioxide from Scottish industrial operations and — using existing offshore pipelines — will store it in secure geological storage under the sea bed.”

M&G said that by 2030 Project Acorn has the potential of achieving more than half of the 10 million tonnes a year of CO2 storage targeted by the UK Government’s Ten Point Plan for a green industrial revolution.

“It can then be scaled up, with the potential to store more than 20 million tonnes of CO2 emissions per year within its first decade of operation – around half the household emissions of a city the size of London,” said M&G.

“The investment, which is expected to boost jobs and develop new skills in the region, was made by M&G’s Catalyst team, who are investing up to £5 billion into privately-owned innovative enterprises working to create a more sustainable world.”

M&G has about £370 billion of assets under management and administration.

The second investment, by M&G’s alternatives team through an external partner, is in Summit Carbon Solutions, a company which aims to lower the carbon footprint of ethanol biorefineries and other industrial emitters throughout the Midwestern United States.

The company plans to install carbon capture equipment at industrial facilities, develop a pipeline network to aggregate and transport CO2 to sequestration sites and drill and operate injection wells.

Once fully developed, the company’s infrastructure network should be capable of capturing and permanently storing more than 10 million tons of CO2 annually – the equivalent of taking 2 million cars off the road per year.

M&G chief investment officer Jack Daniels said: “Carbon capture and storage is emerging as a responsible and pragmatic solution in the effort to arrest global warming.

“As sustainable investors with patient capital, we are able to support these projects through their development phases until they become fully operational.

“When complete, these projects are likely to play a significant role in lowering the carbon footprint of industrial companies, as decarbonising their activities is expected to take longer, which is an important tool in the mix for tackling climate change.”