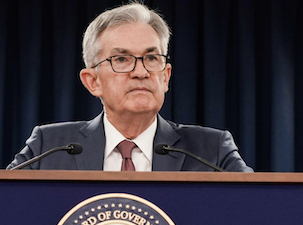 The US Federal Reserve on Wednesday announced its biggest hike in interest rates since 2000 and announced it would start shrinking its $9 trillion balance sheet next month as it unveiled the most aggressive tightening of monetary policy in decades to help fight inflation.

The US central bank’s policy-setting Federal Open Market Committee (FOMC) voted unanimously to increase the benchmark rate by a half percentage point.

The Federal Reserve also signalled it would keep hiking rates at that pace over the “next couple of meetings.”

The increase in the FOMC target for the federal funds rate to a range of 0.75% to 1% follows a quarter-point hike in March that ended two years of near-zero rates.

The Fed also announced it will begin allowing its holdings of Treasuries and mortgage-backed securities to decline in June at an initial combined monthly pace of $47.5 billion and increasing over three months to $95 billion a month.

“Over time, the committee intends to maintain securities holdings in amounts needed to implement monetary policy efficiently and effectively in its ample reserves regime …” said the Fed.

“To ensure a smooth transition, the committee intends to slow and then stop the decline in the size of the balance sheet when reserve balances are somewhat above the level it judges to be consistent with ample reserves …

“Once balance sheet runoff has ceased, reserve balances will likely continue to decline for a time, reflecting growth in other Federal Reserve liabilities, until the committee judges that reserve balances are at an ample level …

“Thereafter, the committee will manage securities holdings as needed to maintain ample reserves over time …

“The committee is prepared to adjust any of the details of its approach to reducing the size of the balance sheet in light of economic and financial developments.”

Federal Reserve chair Jerome Powell said: “Inflation is much too high and we understand the hardship it is causing and we are moving expeditiously to bring it back down.

He said there was “a broad sense on the committee that additional 50 basis-point increases should be on the table for the next couple of meetings.”

Powell’s statement sparked a rally in Treasuries and stocks as he dampened speculation that the central bank was considering an even larger increase of 75 basis points in the months ahead.

Powell said that it is “not something that the committee is actively considering.”

Beth Ann Bovino, US Chief Economist, S&P Global Ratings: “As was the market had expected, the FOMC followed the path they had telegraphed and raised rates by 50 bps and announced its balance sheet unwind as the end of its May 4th meeting.

“While this is the first time since 2000 that the Fed has raised rates by 50 bps, we don’t believe it will be the last. To be direct, as they already may be behind the curve, baby steps won’t work this time if they are going to catch up.

“We see 50 bps rate movements becoming a regular tool in their kit. We expect them to again reach for it in June with another 50-bps hike and wouldn’t be surprised if the Fed goes for the trifecta, with a third 50 bps hike in July.

“This doesn’t mean 50 is the new 25 as a much larger hike may be in the cards and is becoming increasingly likely.  What would stop the Fed from ripping off its monetary accommodation band-aid with a 75 or 100 bps move this year?

“Keeping these current and potential future moves in mind, we do recognize that recession risks have increased: Our qualitative assessment of recession risk over the next 12 months is now 30% (within a 25%-35% range), with a greater risk in 2023 as the cumulative effect of a series of rate hikes starts to bite.”

Richard Carter, head of fixed interest research at Quilter Cheviot: “This 50bps hike by the Federal Reserve is likely to be followed by several more judging by the tone of the statement and the fact that the US economy continues to fire on all cylinders. Inflation is running at over 8% while the latest employment report showed that there are almost two jobs available for every unemployed worker.

“These pressures won’t be going away anytime soon and thus the Fed feels the need to act severely and fast.

“The Fed is likely to push rates up towards the 3% level by year-end provided they are not blown off courses by events such as the war in the Ukraine.

“They also announced the details of their balance sheet reduction program which will see them run down their quantitative easing bond holdings.

“The market has been well prepared for these moves but that doesn’t mean they will necessarily take them well.

“We will continue to see increased market volatility for as long as inflation remains a problem for central banks.”

Dan Boardman-Weston, CEO & CIO at BRI Wealth Management, said: “The Federal Reserve has increased interest rates by 0.50% to a range of 0.75%-1% and announced plans to start unwinding their balance sheet.

“Higher interest rates were expected by the market as inflation continues to hit multi-decade highs and the Fed feels it needs to act quickly before high inflation expectations become entrenched.

“The current conflict in Ukraine and the covid induced lockdowns in China are putting further upward pressure on the rate of inflation and this is expected to be one of many interest rate increases during 2022.

“The Fed is expected to frontload their interest rate increases and we’re likely to see them tighten quickly over the coming months to a rate that dampens economic activity.

“The Fed has a difficult balancing act though as the current cost of living pressures combined with higher interest rates means that the growth outlook for the US is gloomier than it has been since the dark days of Covid.

“A large portion of the inflation continues to be supply driven and interest rate increases are not going to assist with these contributory factors to inflation. 2022 will likely be a pivotal year for monetary policy and the risks of a misstep and a hard landing seem to be increasing.

“The question for investors is whether the increase in rates will slow the US economy and make a recession more likely especially with mortgage rates having jumped by almost 2% so far this year.

“However, the Fed has finally recognised it is behind the curve on inflation and decided it had no choice but to act aggressively today. How long it stays in aggressive mode remains to be seen and relies on many factors that aren’t necessarily in their control.”

JPMorgan chief global strategist David Kelly: “This is a Fed that has cooed like doves for a decade and now they’re trying to squawk like hawks, very loudly.

“But I still think this is a dovish Fed, and I believe they will have a chance to return to their dovish nature later in the year.”