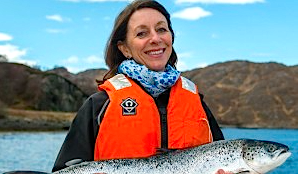 The SSPO plays a central role in representing Scottish salmon farming on political, regulatory, media and technical issues in Scotland, the UK, the EU and internationally.

The Scottish salmon farming industry is worth around £700 million based on farm gate value and employs more than 2,200 people directly and supports a further 6,000 jobs indirectly.

Scottish salmon was voted “best farmed salmon in the world” for a second consecutive time in 2014.

MacColl was chief executive of SDI, the international economic development agency for Scotland, between 2010 and 2015.

More recently, MacColl has been working with the University of Stirling as associate director within its research & enterprise team, with a focus on international business development, aquaculture, innovation and entrepreneurship.

“During my years at SDI, I was always aware that salmon and whisky are iconic products which instantly suggest Scotland and its high quality products, whether you are in the Far East, Europe or America,” said MacColl.

“My recent work with Stirling University which includes the Institute of Aquaculture gave me great insights into the industry and its highly specialised operations.

“When the opportunity arose to become chair of the SSPO, which has helped farmed salmon become Scotland’s number one food export, I was delighted to become involved.

“I hope I can bring some of my international trade and investment experience to further the industry’s development.”

Scott Landsburgh, chief executive of SSPO, said: “I am delighted that Anne is joining us as Chair. She has been a champion of Scottish farmed salmon for many years and recognises salmon farming as one of Scotland’s strategic industries.

“I’m sure that she will bring much useful experience to the industry as it continues to drive exports, employment and its local and national economic success.”