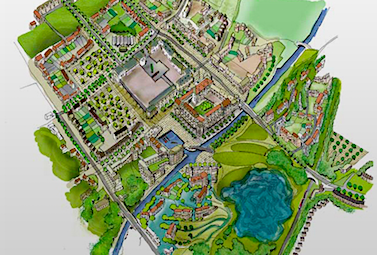 The development is one of the UK’s biggest housing-linked infrastructure projects and will generate up to £1 billion of value to the local economy over 15 to 20 years.

The Scottish Government’s Building Scotland Fund will provide a £26.8 million loan to assist the development as part of a support package agreed under the Edinburgh and South East Scotland City Region Deal.

As well as the new homes and associated infrastructure, West Lothian Council will build a number of new state-of-the-art schools.

Finance Secretary Derek Mackay said: “As we support the continued growth of the Scottish economy, developments like Winchburgh are crucial.

“I am pleased the Building Scotland Fund, has been able to support this development; to unlock the construction of 3,450 new homes and the infrastructure required to make Winchburgh a reality.

“The Winchburgh development is a leading example of a joined up approach between the private sector, government and local council.

“It will help stimulate the economy and bring new homes, schools, transport and community facilities to the area.

“As well as being great for wider economic development, over 700 affordable houses, including 400 for social rent, will be built as part of the development which is excellent news for the region.”

West Lothian’s executive councillor for education, David Dodds, added: “We are delighted to have reached a deal with the Scottish Government and Winchburgh Development Ltd that supports the plans to expand Winchburgh.

“Winchburgh represents the right development in the right place and will help meet the demand for people looking to find a home for their family or business in West Lothian, which is one of the fastest growing areas in Scotland.

“Key to the development is the delivery of new state-of-the-art schools for Winchburgh in the council’s largest ever single capital investment.

“West Lothian already has one of the best school estates in the country, giving a platform to help our young people achieve their full potential and support life-long learning for the whole community.”

“Having already delivered over 558 homes in the first phase with five national housebuilders we now look forward to moving forward with many more housebuilders to deliver much needed homes for West Lothian in the next phase of development.”

Phase One of the Winchburgh plan saw five private housebuilders — Barratt Homes, Miller Homes, Bellway, Stewart Milne Homes and Taylor Wimpey — active on site, with the expectation that many more will participate in the ongoing development.

Cala CEO Kevin Whitaker said: “We are delighted to be partnering with West Coast Capital to help fund and deliver a high quality, sustainable development that will bring multi-tenure housing, education and infrastructure to West Lothian.

“Following the acquisition of Cala by Legal & General last year, we have the appetite, expertise and capability to work on ambitious large-scale projects such as Winchburgh.

“West Coast Capital has worked incredibly hard over the last eight years to bring the site to this advanced stage.

“We now look forward to working with them and other stakeholders to deliver the next chapter of this exciting project, including the Scottish Government and West Lothian Council whom have played a pivotal role in the progression of the development.”

John Hamilton, CEO, Winchburgh Developments Limited, said: “It’s a huge achievement for all parties involved to have reached this point where the plans we have made can start to become a reality.

“The masterplan for Winchburgh goes far beyond building new homes.

“This is set to be one of the most exciting placemaking projects in the UK, which will bring new education facilities, a significant number of permanent jobs, and improved transport links to the area.”