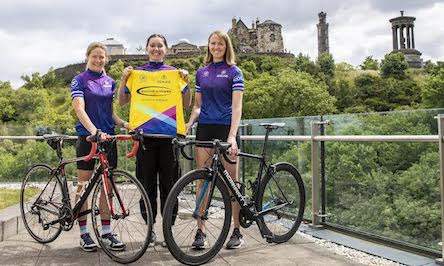 “With its first major professional sports sponsorship, Baillie Gifford hopes that supporting women’s cycling will help bring it up to equal footing with the men’s and the Tour’s coveted yellow jersey will be sponsored by the investment management firm,” said The Women’s Tour of Scotland.

The jersey is made from six recycled plastic bottles and is much like the forthcoming Tour de France traditional yellow jersey, but with a Scottish twist — a saltire design in blue and purple.

It will be awarded to the leading rider at the end of each stage and the final race winner.

Lynn Dewar, partner at Baillie Gifford said: “The new Tour resonated with us in many different ways.

Jack Royle, head of partnerships at the Women’s Tour of Scotland said: “Bringing a women’s professional race to Scotland before the men’s equivalent represented a landmark moment.

“We set out with a commitment to ensure it delivered equal pay to its men’s counterpart and wanted to put sustainability at the forefront of a professional race.

“It’s hugely exciting to be delivering on these objectives with the support of Baillie Gifford as our lead partner.”

Archibald’s Scotland team will be part of a 16 team peloton competing with some of the leading international teams in women’s cycling, featuring riders from 20 different countries.

One of the peloton’s leading teams will be Belgium’s Lotto Soudal Ladies — who will be led in to the race by Dani Christmas, winner of the 2019 Tour de Belle Isle en Terre.

Archibald said: “It is both an honour and a privilege to be leading my country in this race.

“My journey from being just being a wee girl enjoying riding my bike around Glasgow to now be competing at this level of racing on my own roads is something really special.

“It’s great to see such a great list of teams, with some of the best riders in the world competing for this coveted yellow jersey. We can’t wait to put on a show for the home fans, so hopefully everyone will come out and watch the race. Roll on August!”

Baillie Gifford employs 1,155 people and has assets under management of £193.7 billion.