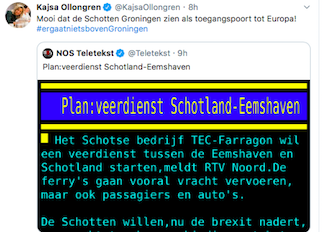 A Scottish company and a Dutch port are working on launching a new freight ferry line ahead of the UK’s possible exit from the European Union, according to news reports in the Netherlands.

The new ferry would potentially provide an alternative route for Scottish exports like whisky if Brexit caused freight transport delays.

Reuters reported that the ferry line would run between Rosyth and Groningen Seaport at Eemshaven, in the far north of the Netherlands near the German border, citing a report by RTV Noord, which named the company involved as Aberfeldy-based TEC Offshore.

A spokesman for Groningen Seaport confirmed the plan was being investigated but referred questions to “the Scottish side.”

“This would be a daily crossing, which is fantastic,” said Margaret Simpson, head of policy for Scotland & Northern England at the UK’s Freight Transport Association.

She said the idea had been under consideration for some time and might make sense even if Brexit didn’t happen.

Simpson said: “It makes a lot of sense, given the potential delays …

“Rather than going to southern England to sit in a queue, just drive to Rosyth.”

Simpson added: “The key to the success of this route will be getting whisky on board.”

Dutch Deputy Prime Minister Kasja Ollongren tweeted in response to the news of the proposed ferry. “Nice that the Scots see Groningen as the gateway to Europe.”

The RTV report quoted TEC director David Kellas as saying it would be difficult to have the line running by the Brexit date of October 31, “but we’re an ambitious company.”