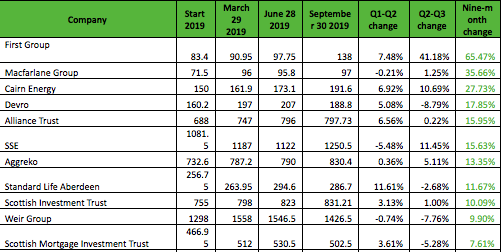 Scottish FTSE-listed company shares have gained 6.81% in the first nine months of 2019, against the FTSE All Share’s 10.39% rise, according to the latest analysis from Brewin Dolphin.

In the third quarter of 2019, shares of Scottish companies listed on the FTSE continued to lag the wider index as their AIM (Alternative Investment Market) counterparts made a partial comeback.

Scottish organisations listed on AIM ended the three months to the end of September 2019 +20.98% higher, compared to a -5.12% loss on the AIM All Share.

Meanwhile, FTSE-listed companies in Scotland were down -2.61% on average in the third quarter, drifting slightly from the FTSE All Share index’s nominal +0.30% gain over the same three months.

Scotland’s AIM constituents were dragged down by continuing troubles at fashion retailer Quiz, which has lost more than half (-52.54%) of its value since the turn of the year.

Plexus Holdings and Parkmead’s stock has also lost significant value (-36.83% and -29.17%, respectively), on the back of volatility in the oil price.

Surveillance systems designer Indigovision has seen its shares nearly double this year, with a +96.97% rise since the beginning of 2019.

Murgitroyd has been the subject of takeover speculation in the last few days, while Eland Oil & Gas has been acquired by Seplat Petroleum.

“It also underlines why investors should ensure they have a diverse portfolio of assets – both geographically and sectorally – and have taken appropriate professional advice.

“On first inspection, AG Barr, CYBG and Wood are very different businesses, but what has affected them in the period has been trends outside their control: weather, a last-minute PPI rush, and a volatile oil price.

“However, what unites them is that in order to turn around their recent bad fortune, self-help and execution of management aims will be key.

“For AG Barr this is a return to the shrewd reading of end-market trends and an ability for innovation to capture the imagination of consumers.

“Moves to refresh its Rockstar energy drink brand and the introduction of Irn Bru Energy offer hope in this respect.

“CYBG was hit not only with the value of last-minute PPI claims, but volume too.

“The combination will drain staff and financial resources in the short term, at a time when generally there are concerns about some of the challenger or alternative finance businesses.

“Smooth execution of the PPI issues and an ability to return people and capital to growth prospects offers the potential for better times ahead.

“Meanwhile, Wood is facing a difficult capital expenditure environment, but the company is making strides to simplify its business.

“Selling off its nuclear service assets, along with other disposals and overall debt reduction, will leave the company well placed to benefit from any end-market upturns.”