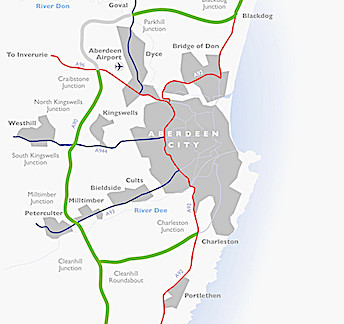 The joint venture of Galliford Try and Balfour Beatty is in advanced discussions to settle claims related to the construction of the Aberdeen Western Peripheral Route (AWPR), the companies said on Monday.

Galliford Try and Balfour Beatty jointly worked on the Aberdeen road project and incurred extra costs after the collapse of Carillion.

Galliford Try said in a stock exchange statement: “Galliford Try plc … announces that, following a lengthy period of negotiation, the Aberdeen Western Peripheral Route (AWPR) joint venture has substantially agreed settlement terms with the client in respect of the final account of this major infrastructure project.

‘As a result of the settlement Galliford Try expects to receive a cash payment of around £32m and incur a write-off of £52m.

“The settlement brings to a conclusion a complex and challenging project, averting a lengthy and costly litigation process.

“The settlement also removes a significant distraction and uncertainty, allowing the construction business to focus on its core business, current and new projects which are expected to deliver improving margins, operating on multiple secured frameworks and in our chosen sectors.

“Taken together with an adverse adjudication award on an unrelated historical contract in the period, the group will report an exceptional write-off of circa £61m at 31 December 2019 …”

Balfour Beatty said in a stock exchange statement: “The Aberdeen Roads Limited joint venture is in advanced discussions with the client regarding a settlement to resolve its claim on the construction of the Aberdeen Western Peripheral Route (AWPR).

“A conclusion to these advanced discussions would result in Balfour Beatty receiving around £32 million as part of the settlement with no material change to the group’s balance sheet position.

A Transport Scotland spokesman said a “strictly commercial settlement” had been reached with no admission of liability by either party.

“The detailed terms of this settlement are now being developed between the parties as quickly as possible,” he said.

“Due to this ongoing legal discussion, it would be inappropriate to comment on the terms of the settlement at this time.

“As the first anniversary of the full opening of the Aberdeen Western Peripheral Route/Balmedie to Tipperty project approaches, it is important to recognise the transformational effect this project has had on people’s daily lives in the north east, as evidenced through the widespread public support for the completed project.

“Overall, the benefits of the project are plain for everyone to see, as it improves quality of life and supports the wider economy as a whole.”