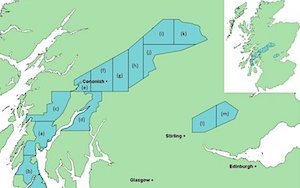 Shares of Scotgold Resources Limited, the gold exploration and production company, rose another 6% on Friday after it published an update on the development of its Cononish Gold and Silver project in Scotland.

Shares of Australia-based Scotgold Resources, which trade on AIM in London, have more than doubled in the past 12 months to Friday’s 97p to give the firm a stock market value of almost £50 million.

Scotgold also provided a general corporate update and news of an expansion of the company’s Geoscience team.

“The underground development has benefited from the arrival on site of the previously announced standby ST2G scooptram and the first of the two new T1D drill rigs is currently in transit.

“With the completion of the critical platform earthworks, concrete works and placement of major equipment items; plant construction is now focussed on the building structure, to be followed by the installation and connections of pumps, drives, piping and electrics and ultimately commissioning.

“As previously announced, Cononish currently has estimated reserves of 550,000t at a head grade of 11.8g/t Au which, at an average annual production rate of 23,370oz, equates to a nine year life of mine, although there is the potential to increase this in the future.

“It is with this in mind and also the advancement of the company’s Grampian exploration project, that the company is also pleased to announce that is has taken steps to further expand its Geoscience team.

“The first of these is the appointment of Dr Simon Dominy as Group Manager – Resources & Reserves.

“Simon is a mining geologist-engineer with over 25 years of practical and management experience in project development, value generation and operational optimisation.

“He has extensive experience in underground narrow-vein gold mining relevant to the Cononish mine, with skills across orebody knowledge; strategic and tactical geometallurgy; resource development; ore control and reconciliation; mine design; mineral processing and management.

“Simon is a Competent Person for Mineral Resources and Ore Reserves as defined in The JORC Code 2012.

“He is a Visiting Associate Professor at the Camborne School of Mines, University of Exeter, England, and sits on a number of industry committees related to the IOM3 and Geological Society of London.

“Secondly Mr David Catterall has been appointed as Exploration Consultant to advise on the Grampian Project.

“David is a SACNASP registered Professional Exploration Geologist with over 30 years’ experience in the resource sector; with an emphasis on structural mapping and interpretation, geochemistry and geophysics.

“He has specific experience of gold exploration in the Dalradian Belt with Scotgold and others, and his project experience ranges from grass roots exploration across a range of commodities to feasibility studies for open pit and underground operations in gold and base metals.

“The Grampian exploration project is focused on identifying gold and base metal mineralisation within the highly prospective Grampian Terrane.

“This geological terrane consists mostly of metasediments and volcanics of Dalradian age and is a direct continuation of the Dalradian gold province of Northern Ireland which hosts the Curraghinalt and Cavanacaw gold deposits.”

Scotgold Resources CEO Richard Gray said: “The depth of our geological understanding of both Cononish and the Dalradian belt is obviously key to our long-term success and with the appointments made today, we are building a world class geoscience team to unlock the fantastic potential of this whole area and our significant land holdings in particular.

“Our objective is to use the cash flow generative platform which Cononish is expected to provide to build a highly profitable, low risk gold mining company operating in stable jurisdictions.

“With this in mind, I am confident both Simon and David will prove invaluable to Scotgold and I look forward to providing further updates on our progress.”